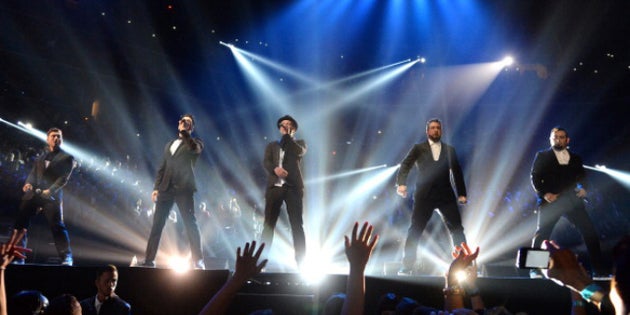 ‘NSYNC may have joined Justin Timberlake for fewer than two minutes of his big VMA retrospective medley, but it was enough to give the band a big sales bump on iTunes’ and Amazon’s sales charts.

Among the increases logged at the two music stores, Timberlake’s “Justified” jumped 1,876 percent and his former boy band’s “Bye Bye Bye” jumped 156 percent on Amazon’s “Movers & Shakers” chart, while their greatest hits album, released in 2005, hit No. 10 at Amazon and No. 18 on iTunes.

At iTunes, “No Strings Attached” rose to No. 29, and the band’s eponymous debut album is at No. 61 — one spot above Timberlake’s “FutureSex/LoveSounds.” (The “explicit” version, that is — the clean version is at 75.)

On Amazon, Timberlake’s “Cry Me a River” jumped 1,337 percent. “My Love,” “Rock Your Body,” “What Goes Around … Comes Around” and “SexyBack” all made huge jumps in singles sales, and his “Justified” album was the No. 1 “Mover & Shaker,” with sales increasing 1,876 percent. “FutureSex/LoveSounds” was No. 4.

All in all, not a bad night for Timberlake and his former group mates — and they didn’t even have to twerk to do it.