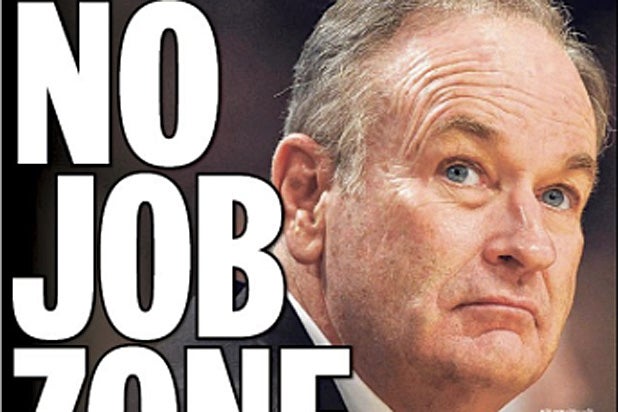 Bill O’Reilly has been the butt of countless jokes since his ousting from Fox News on Wednesday, and not surprisingly, the New York Daily News isn’t pulling any punches with its latest cover.

Thursday morning’s front page proclaims: “No Job Zone,” as a play on words with the former “O’Reilly Factor” host’s tagline, “No Spin Zone.”

“Welcome to the ‘No Sin Zone,'” the accompanying online article quips, saying: “Bill O’Reilly, the bellicose front man at the Fox News Channel for 21 lucrative years, received a slip Wednesday after a company probe into allegations that he sexually harassed female co-workers.”

Reflective of the polarizing conservative pundit, opinions of the cover on social media were heavily divided.

“He has more money than you’re entire paper who loses money every year,” one user wrote.

“I have a fierce love/hate/ohnotheydidnt relationship with NYDN. And I’m loving you today,” said another.

Another observed: “Fox fired O’Reilly for running off advertisers. O’Reilly could have sexually harassed a Girl Scout and Fox would have kept him.”

See the cover below, along with the for/against tweets.

@NYDailyNews Fox fired O'Reilly for running off advertisers. O'Reilly could have sexually harassed a Girl Scout and Fox would have kept him

@NYDailyNews He has more money than you're entire paper who loses money every year.

@NYDailyNews When you're almost 70 years old and make millions you can probably retire. ????

@NYDailyNews I have a fierce love/hate/ohnotheydidnt relationship with NYDN. And I'm loving you today.

@NYDailyNews I would sue