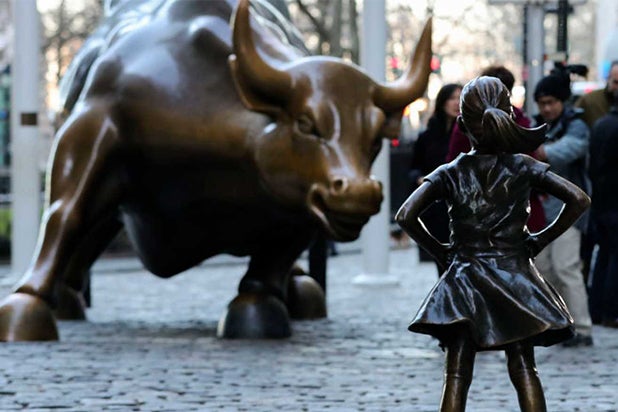 The “Fearless Girl” statue will continue to stare down the charging bull on Wall Street in Manhattan through February 2018, thanks to New York City Mayor Bill de Blasio.

“In her short time here, the Fearless Girl has fueled powerful conversations about women in leadership and inspired so many,” de Blasio said in a statement. “Now, she’ll be asserting herself and affirming her strength even after her temporary permit expires — a fitting path for a girl who refuses to quit.”

The statue of a four-foot tall young girl defiantly staring into Wall Street’s famous bull has stolen hearts around the world since its unveiling at March 8’s International Women’s Day, as its come to symbolize feminism and female empowerment. It’s sculptor, Artist Kristen Visbal, was honored Monday morning at a news conference in front of City Hall by U.S. Rep. Carolyn Maloney.

Commissioned by the asset management firm State Street Global Advisors, “Fearless Girl” stands on Department of Transportation property, and its permit was been extended thanks to the department’s art program. A petition, signed by 28,000 people has been started to keep her there indefinitely. Nira Desai, who started the petition, called the extension “really incredible news.”

“‘Fearless Girl’ has shed a light on the issue of the need for gender diversity more than anything before her has,” Desai told CNN. “It’s time for gender equality in the boardroom, time for men and women to work together in leadership.”