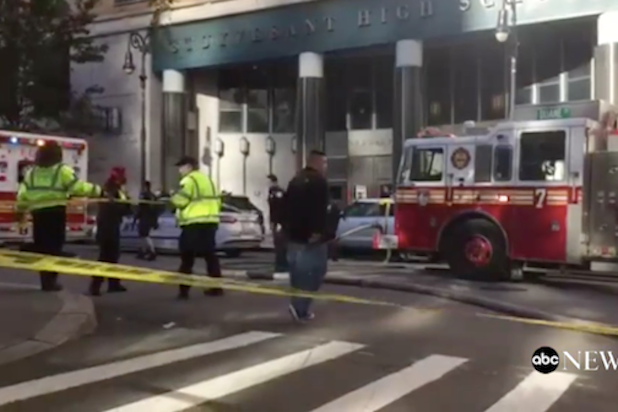 ABC News has obtained eyewitness footage of what it says is the alleged attacker reportedly taken just after the attacker crashed the truck he was driving into a school bus. See it below.

Multiple news outlets have since reported, and NYPD have confirmed, that the suspect is Sayfullo Habibullaevic Saipov, a 29 year old who emigrated from Uzbekistan to Tampa, Florida in 2010.

NBC News: Suspect in the New York City attack is Sayfullo Habibullaevic Saipov. He was born in February of 1988. Came to U.S. in 2010.

At least eight people were injured when a truck driver veered onto a bike path. He emerged from the truck firing a fake gun, and has been taken into custody, police said. The FBI is investigating it as an act of terror, and the suspect yelled, “Allahu Akbar,” which means “God is great,” according to CNN.

Shots may have been fired, The New York Times reported, but it is not immediately clear where they came from.

A witness told ABC’s New York station WABC that they saw multiple people hit on the bike path on the West Side Highway, and that the truck hit a school bus near Stuyvesant High School at Chambers and West streets.

“Everybody started running,” the witness said. “Everything was happening so fast.”

“[The driver] kept going all the way down full speed… Thank god the trick-or-treaters weren’t out yet,” the witness said.