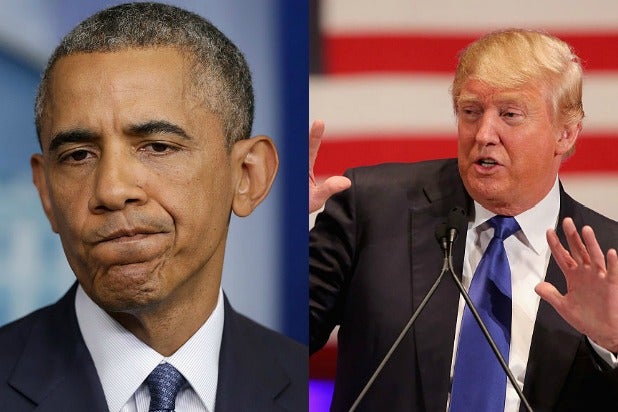 While Donald Trump was in the middle of explaining his decision to take the United States out of the Paris Accord, former President Obama issued a statement defending the international climate change agreement he negotiated.

“I believe the United States of America should be at the front of the pack,” Obama wrote. “But even in the absence of American leadership, even as this Administration joins a small handful of nations that rejected the future; I’m confident that our states, cities, and business will step up and do even more to lead the way, and help protect for future generations the one planet we’ve got.”

JUST IN: Statement from President Barack Obama on the Paris Climate Accord: pic.twitter.com/hVDrsPFrTH

Trump announced that the United States would withdraw support for the Paris global climate pact in a statement from the Rose Garden on Thursday, calling it a bad deal for Americans but promising he will try to negotiate a better deal.

“It was stead, principled American leadership on the world stage that made that achievement possible,” Obama wrote. “It was a bold American ambition that encouraged dozens of other nations to set their sights higher as well.”

Obama said the deal “set the world on a low-carbon course” to “protect the world we leave our children,” but Trump clearly disagrees.

“The United States will withdraw from the Paris climate accord, but begin negotiations to re-enter… on terms that are fair to the United States,” Trump says. “We’re getting out.”

Trump said the deal creates “lost jobs” and “shuttered factories” while “vastly diminishing” economic production. The sure-to-be polarizing decision fulfills a campaign promise for Trump but will make relationships tense with international allies who spent years working on the agreement.

Trump’s decision to pull out could be seen as a shot at former President Obama, who was instrumental to forming the deal, which he signed on in August 2016.

“The United States, under the Trump administration, will continue to be the cleanest and most environmentally friendly country on earth,” Trump said. “We don’t want other leaders and other countries laughing at us anymore, and they won’t be.”