President Obama was named the surprise winner of the Nobel Peace prize Friday morning — and the White House was as shocked as everyone else. 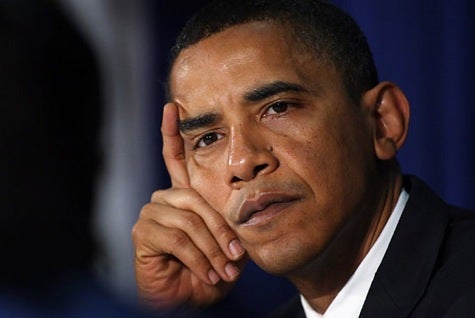 The prize is a surprise because it is coming so early in the Obama administration and nominations for the prize had to be made by Feb. 1.

Obama began his presidency Jan. 20, which in theory means the nomination technically reflects the new president’s work for 11 days, though the voting didn’t take place until much later.

He is the third sitting president to be awarded. Theodore Roosevelt was a recipient in 1906 and Woodrow Wilson in 1919.

The Nobel committee in Oslo cited Obama “for his extraordinary efforts to strengthen international diplomacy and cooperation between peoples.”

In Rose Garden comments, the president described himself as “both surprised and deeply humbled.”

“This is not exactly how I expected to be woken up,” he said.

He said he viewed the prize not as recognition for his own accomplishments but as that  of the new direction of America. “I will accept this award as a call to action to confront the common challenges of the 21st Century,” he said, adding that the prize should be  “shared by everyone who strives for justice and dignity.”

In announcing the prize, the committee said it “attached special importance to Obama’s vision of and work for a world without nuclear weapons."

Obama, it said, as president has “created a new climate in international politics … Multilateral diplomacy has regained a central position, with emphasis on the role that the United Nations and other international institutions can play. Dialogue and negotiations are preferred as instruments for resolving even the most difficult international conflicts. The vision of a world free from nuclear arms has powerfully stimulated disarmament and arms control negotiations.

“Thanks to Obama’s initiative, the USA is now playing a more constructive role in meeting the great climatic challenges the world is confronting. Democracy and human rights are to be strengthened."

The Pew Research Center for the People and the Press suggested that the prize may have reflected President Obama’s personal approval rating abroad.

"Today’s news is another sign of his international appeal,” said the center’s president, Andrew Kohut in a statement. “Across much of the globe, publics give Obama positive ratings, and his election effectively turned around America’s negative image in many countries. Still, America’s image challenges persist in much of the Muslim world, where enthusiasm for the new president is relatively low.”

He cited a 25-nation Pew survey conducted in May-June showing that 93 percent of Germans had confidence in Obama to do the right thing in world affairs, as did 91 percent in France and 86 percent in Britain.

Obama, he added, gives speeches trashing his own country and for that gets a prize, which is now worth as much as whatever prizes they are putting in Cracker Jacks these days.”

As for Democrats, House Speaker Nancy Pelosi said, "President Obama is working to restore American leadership worldwide and build bonds of friendship across the globe. The Nobel Peace Prize is a testament to his leadership and vision and a tribute to American values."

And Obama chief strategist David Axelrod said on MSNBC that the award was “nothing that anytone expected … certainly nothing the President sought.”

He said the president is less interested in advancing individual honors “than advancing the causes cited by the Nobel Committee. It is, he said, “affirmation that the things he has been talking about around the world for the last nine months are important."

The White House said Friday afternoon that the nearly $1.4 million Obama will receive for winning the prize will be donated to charity, but didn’t provide any immediate detail.