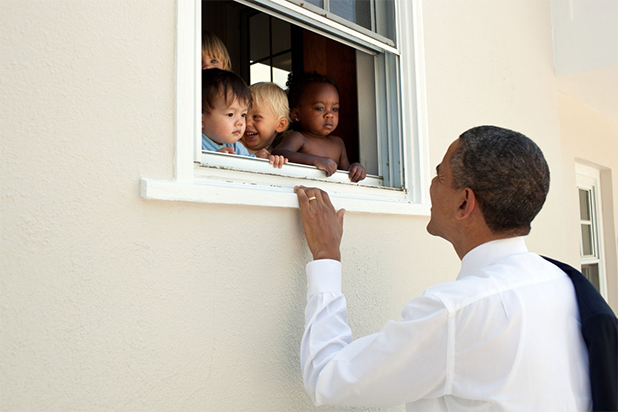 Former President Barack Obama made Twitter history on Tuesday night when his tweet about the violence at white supremacist rallies on Saturday in Charlottesville, Virginia, became the most “liked” tweet ever.

The tweet features a photo of the former president peering into a window, face-to-face with some children of varying races. It was taken in 2011 when he was visiting his daughter Sasha’s school in Bethesda, Maryland.

“No one is born hating another person because of the color of his skin or his background or his religion…” it says, quoting a famous creed from Nelson Mandela.

Obama continued the quote from Mandela in a series of two more tweets: “People must learn to hate, and if they can learn to hate, they can be taught to love… …For love comes more naturally to the human heart than its opposite.”

Obama’s tweet stands in stark contrast to comments made Saturday, Monday and Tuesday by current president Donald Trump, who has maintained his stance that “both sides” are to blame for the violence in Charlottesville. Trump also failed to condemn the acts as terrorism that resulted in one death and 19 injuries at the hands of a white supremacist participating in the rallies.

“What about the alt-left that came charging at, as you say, the alt-right. Do they have any semblance of guilt?” Trump said to a reporter at his off-the-rails press conference Tuesday afternoon, after asking her to define the term “alt-right” for him. He dug into his point, saying the counter-protesters came “charging” at the white supremacist groups “with clubs in their hands.”

Trump also failed to call the violence at the white supremacist rallies terrorism when reporters pushed. A participant at the weekend demonstration drove his car into a crowd on counter-protesters, killing Heather Heyer, 32, and injuring 19 others. Trump called the driver a “murderer,” but said he didn’t want to get into “legal semantics.”

#Trubama: Breaking Down the Bromance Between Obama and Trudeau (Photos)

Wait… has anyone told Joe about Barack’s other bro?

Every really good relationship begins with finding things in common. Barack Obama and Justin Trudeau are both young, charismatic, good-looking lovers of democracy. So it's no wonder that as soon as they met, the internet immediately shipped them together. Trubama lives on, even after one half has left office.