Actor Carl Ballantine, whose career spanned vaudeville, television, Vegas and Broadway, died Tuesday at his Hollywood home of natural causes. He was 92. 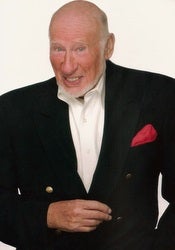 Born Meyer Kessler, he started performing magic tricks as a kid, learning them at age 9 from his barber. By 13, he was a successful enough performer to support his family.

One night a magic trick went haywire and he threw out some funny lines to cover it. Thus the Amazing Ballantine was born.

Ballantine caught the tail end of vaudeville, playing the Palace in New York City and the Hippodrome in Baltimore, among other major venues.

Ballantine was the first magician to play Las Vegas, appearing on a bill with Harry James, Betty Grable and Sammy Davis Jr.

He made his biggest impact as a comically inept magician, billed variously as "The Amazing Ballantine," "The Great Ballantine" and "Ballantine: The World’s Greatest Magician."

Steve Martin presented Ballantine with the Lifetime Achievement Fellowship from the Magic Castle in Hollywood in 2007.

"Carl Ballantine influenced not only myself but a generation of magicians and comedians," Martin said Wednesday in a statement to the Los Angeles Times. "His was also the most copied act by a host of amateurs and professionals."

He had numerous other television credits, the best known being "McHale’s Navy," on which he played Lester Gruber.

He also appeared in feature films including "The Shakiest Gun in the West," "The World’s Greatest Lover," "Mr. Saturday Night" and "Speedway." The latter film starred Elvis Presley, who offered Ballantine a Cadillac. His wife, comedian Ceil Cabot, wouldn’t allow him to accept it.

However, she did approve of him going to Broadway in the 1971 revival of "A Funny Thing Happened on the Way to the Forum" with Phil Silvers.

Ballantine is survived by his sister, Esther Robinson; and daughters Saratoga, an actress, and Molly, an advertising sales executive.

In lieu of flowers, the family requests donations be made to Used Pets, 517 W. Buckthorn, Inglewood, CA 90301.