Beatrice Arthur, the tall, husky voiced actress who made a career out of playing acerbic, strong-willed women died Saturday of cancer in her Los Angeles home. She was 86. 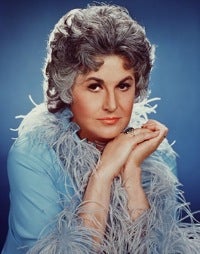 She also won a Tony Award for her portrayal of Vera Charles in the Broadway musical “Mame” and five nominations and one Emmy for Norman Lear’s groundbreaking sitcom, “Maude.”

Privately unlike her famous characters, she once said that all she and they had in common was: "All three of us are 5-foot-9 1/2 in our stocking feet and we all have deep voices." And all, she said, tended to be "bubble prickers."

Arthur was born Bernice Frankel on May 13, 1922, in New York City, the daughter of department store owners. A Broadway regular, she was brought to Hollywood after Lear spotted her in the off-Broadway “The Shoestring Review” in 1971, to play Edith Bunker’s cousin Maude in “All in the Family.” Her character got her own spin-off a year later and ran for six years on CBS.

After "Maude," she returned to for ABC’s short-lived adaptation of the hit British series "Fawlty Towers," titled "Amanda’s," but followed that with "The Golden Girls," which ran from 1985 to 1992.

Though she dreamed of being a June Allyson type, the New York Post’s Richard Watts wrote in his review of “Mame” that Arthur’s Vera was "a portrait in acid of a savagely witty, cynical and serpent-tongued woman who is at once a terror, a scourge, the relentless voice of truth and a pleasure to have around."

And Time magazine said Arthur "delivers a line as if someone had put lye in her martinis."

When Lucille Ball replaced Angela Lansbury in the title role for the movie, Ball made it clear she wanted Arthur to continue in the role:  "She was the greatest Vera Charles in the world," Ball told the Hollywood Reporter. "We wrapped the whole production around [her]."

Arthur was married twice: first to playwright Robert Alan Aurthur. For her stage, she changed Bernice to Beatrice and changed the spelling of Aurthur’s last name. After their divorce, she married Gene Saks, who she met at the Actor’s Studio in New York. They divorced in the late 1970s, had two sons, Matthew and Daniel, who survive her, along with two grandchildren.