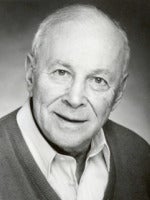 Lieberman worked in the industry for seven decades, representing stars such as Henry Fonda, Dorothy Lamour, William Shatner, Tony Bennett, Jack Paar, Joan Blondell and Joey Bishop. But it was his decades-long relationships with Hope, and later Diller, that defined his career.

Diller told the Los Angeles Times that Liberman was a "gentle man" with a "marvelous sense of humor. Frank was such a fun, fun, fun, fun guy. We were always back and forth with the jokes."

Liberman died of pneumonia Sunday at Providence Tarzana Medical Center, his family said. He had been suffering from Parkinson's disease.

He was the publicist for many films, including "The Miracle Worker," "David and Lisa," "Fiddler on the Roof" and "Boy, Did I Get a Wrong Number.

Liberman founded Frank Liberman and Associates in 1947. He worked for Warner Bros. before and after his military service in WWII.

Liberman was married to Pat Harris, a talent agent and casting director who died in 1984. His two daughters work in the entertainment industry: Meg Liberman of CBS Television Studios casting and Kay Liberman, a manager and producer. He was the brother-in-law of New York showbiz columnist Radie Harris.

The family asks that donations go to the Los Angeles Jewish Home for the Aging in Reseda or Project Angel Food in Los Angeles.