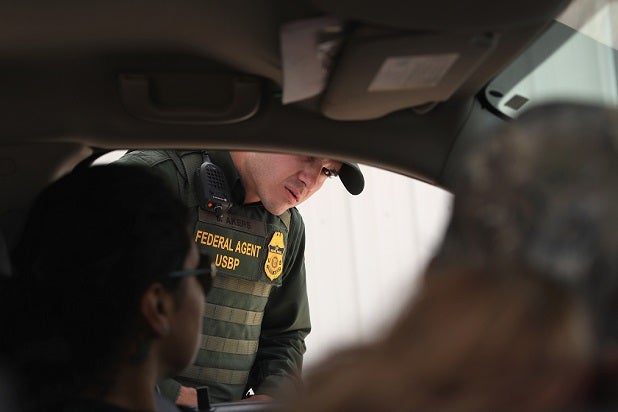 The candy seems to come out earlier and earlier every year during the run-up to Halloween. And so does the uproar over certain Halloween costumes.

Spirit Halloween has come under fire for a Halloween costume consisting of a faux uniform for a Border Patrol officer — a costume that some consumers have deemed “offensive” in light of the current heated debate over immigration.

The costume bears a name tag reading Agent Wall, a seeming nod to President Trump’s vow to build a wall between the United States and Mexico — especially since, according to Gothamist, the costume is being sold next to Trump masks in Spirit Halloween stores in New York.

But at a time when immigrants feel increasingly targeted, and Trump has announced plans to kill off the DACA program, which protects young undocumented immigrants from deportation, the costume doesn’t seem particularly cute to some people.

“As Donald Trump and his out-of-control immigration agencies escalate their attacks on our families, the pain of our communities is no laughing matter — and certainly should not be a part of anyone’s Halloween celebrations,” Valdés told Gothamist. “These products should be immediately discontinued, and the company should apologize immediately.”

The costume was also criticized on social media.

“@SpiritHalloween why exactly do you have a border patrol costume. Do you have any idea how many lives and families are ruined over that?” wrote one critic.

“Please don’t shop at @SpiritHalloween this year,” implored another Twitter user. “This border patrol costume is offensive in every way and normalizes racism.”

Also Read: So, Jason Aldean Dressed as Lil Wayne for Halloween... (in Blackface)

“Think about implications of costumes before wearing. Not this one though, it’s just offensive,” another criticism read.

In a statement to Gothamist, Spirit Halloween said that the Border Patrol agent costume is akin to “that of a police officer, military costumes, firefighter, doctor and more.”

“Spirit Halloween offers a full range of Halloween costumes that celebrate and appreciate all cultures, occupations and figures, both real and imaginary. With that, we playfully acknowledge topical themes — and building the wall is certainly a trending conversation in today’s political climate,” Spirit said. “We believe this costume carries similar sentiments akin to that of a police officer, military costumes, firefighter, doctor and more. As the president continues to drive the headlines and hashtags, we have costumes for everyone to join in on the fun, including: piggybacking on Mr. President, a host of masks that illustrate Trump’s many personas and a presidential BFF Putin mask. We’ve respectfully developed these costumes knowing that Halloween is a time for humor and fun, and due to the overwhelming popularity of these items last year, we think it’ll be a huge hit with our shoppers again!”

@SpiritHalloween why exactly do you have a border patrol costume. Do you have any idea how many lives and families are ruined over that?

Please don’t shop at @SpiritHalloween this year. This border patrol costume is offensive in every way and normalizes racism. pic.twitter.com/1Leh6R7qAS

Think about implications of costumes before wearing. Not this one though, it’s just offensive https://t.co/9MbsjdhLCD via @TeenVogue