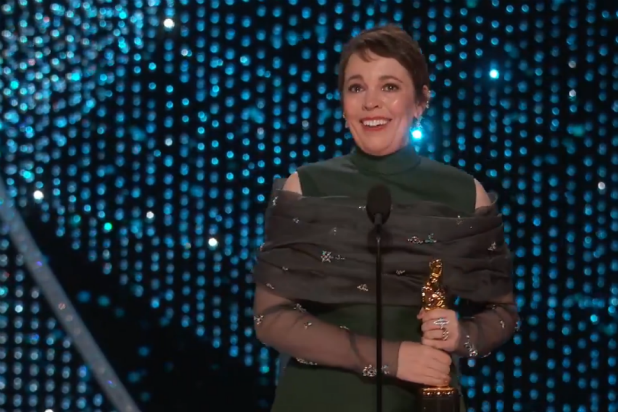 After she won Best Actress at the 91st Academy Awards, an almost-overcome Olivia Colman thanked her director and co-stars, and then thanked the actress she seems to think should have won tonight.

“Glenn Close, you’ve been my idol for so long and this isn’t how I wanted it to be,” said Colman, who won for “The Favorite, in which she portrayed Queen Anne. “I think you’re amazing and I love you very much.”

Close, a seven-time nominee who has never won an Oscar but was seen as a front-runner this year after her work in “The Wife” won a Golden Globe in January and could be seen beaming during Colman’s speech.

Also Read: Yes, We Got All the Way Through the Oscars Without Hearing Bryan Singer's Name Even Once

About “The Favourite” director Yorgos Lanthimos, Colman called him “my best director,” and said of her co-stars Rachel Weisz and Emma Stone, that they are “the two loveliest women in the world to fall in love with.”

Colman also thanked the other nominees, her agent, her mother and father, and her children who she said were at home watching, before joking that if they weren’t, they’re missing out because “this is not gonna happen again.”

She also devoted her win “to any little girl who’s practicing her speech on the telly, well you never know,” and revealed that before she was an actress she worked as a cleaner. “I loved that job,” she said, though “I did spend a lot of time imagining [this].”

Colman realized at this point that she was running out of time and ran quickly through the other people she wanted to thank, including her husband and the cast and crew of her film, and then ended her remarks with a heartwarmingly abrupt shout-out to another Best Actress nominee.

“Lady Gaga!” Colman yelled, and blew her a kiss.