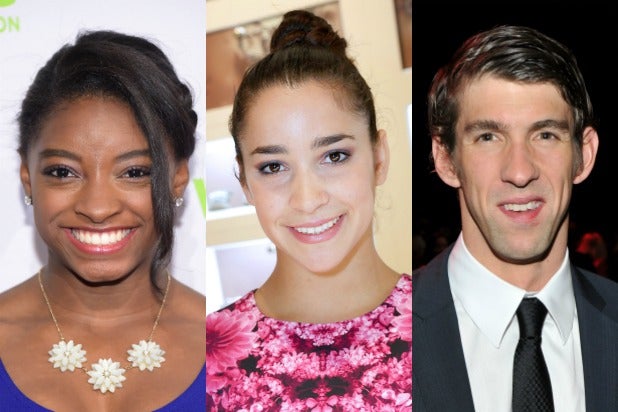 TheWrap has partnered with Canvs, a language analytics company that measures emotions around content, for a weekly look at the stars that have TV viewers the most worked up. In this special Olympics edition, the data below covers August 5-9 — from the Opening Ceremony through Tuesday night.

The Emotional Reactions (ERs) prompted by the Olympics so far have been overwhelming, numbering 2,945,132 (out of 10,872,822 Olympics-related tweets captured by Canvs’ partner Nielsen), and they’ve been coming fast and furious — at an average rate of 409 ERs per minute. Though multiple NBC sister networks are also showing Olympic events during the daytime, these results come primarily from primetime coverage on NBC itself.

American athletes are, no surprise, dominating the social media conversation, with a critical mass of TV viewers who are watching the Olympics making a point of using the official Twitter handles of famous (and suddenly famous) Rio competitors. As of this writing, gymnast @Simone_Biles is leading the way; her handle has been name-checked in 2.5 percent of ERs. (The only handles with higher usage right now are @TeamUSA at 5.9 percent and @NBCOlympics at 4.7 percent.)

Scraping my jaw off the floor and shaking off my goosebumps after @Simone_Biles' floor routine. #TeamUSA

#Beastmode @Simone_Biles #What an incredible athlete #USA #WomensGymnastics A super star in the making. #TeamUSA

Right behind her is fellow gymnast @Aly_Raisman, name-checked in 2.4 percent of ERs — with a little help from Lynn and Rick Raisman, Aly’s parents, whose own reactions as audience members have become a Twitter obsession.

Right now, @MichaelPhelps, name-checked in 2.3 percent of ERs, is just behind @Aly_Raisman, but Phelps’ numbers will surely rise as the social media conversation about his history-making performance — grabbing another two golds on Tuesday to bring his career total up to 21 — continues to explode.

Crazy Stat of Day: If Michael Phelps were his own country, he'd be tied in 39th w/ most Summer Olympic gold medals. pic.twitter.com/Qs1jUKjVHN

Very honorable mentions: @gabrielledoug at 1.1 percent and @katieledecky at 0.9 percent.