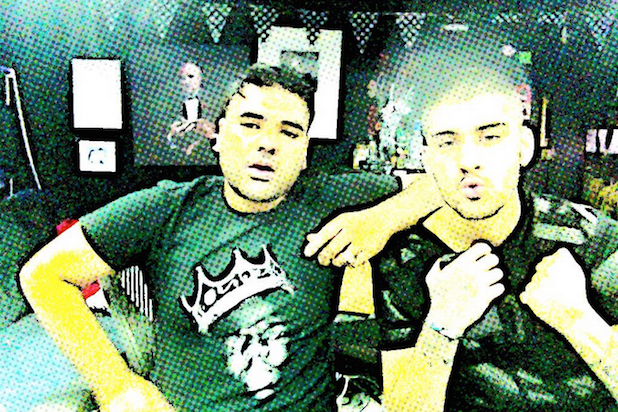 Producer Naughty Boy uploaded a picture of him and Zayn Malik on Wednesday morning, provoking a Twitter feud with Malik’s former One Direction bandmate Louis Tomlinson.

The picture shows Malik and Naughty Boy in the recording studio in the wake of Malik’s departure from One Direction and announcement of a solo career in March.

It appears Tomlinson didn’t like the filter used in the photo, because he took to Twitter to mock the choice.

Remember when you were 12 and you used to think those Mac filters for your pictures were cool haha ! Some people still do HA!

Naughty Boy, who follows Tomlinson, fired back with a shot of his own.

@Louis_Tomlinson and some people can’t even sing.. but who’s complaining when there’s auto tune eh — Naughty Boy (@NaughtyBoyMusic) May 6, 2015

@NaughtyBoyMusic Jesus forgot you were such an in demand producer …. How does it feel to be riding on the back of someone else’s career ?

That’s when Malik chimed in, eliciting either outrage or praise from 1D fans.

@Louis_Tomlinson remember when you had a life and stopped making bitchy comments about mine ? — zaynmalik (@zaynmalik) May 6, 2015

Malik’s new music partner took it a step further, dissing Tomlinson while name-dropping a few of his clients.

@Louis_Tomlinson Yeah how does it feel mate? You’ve been doing that for the last five years… I’ve got Emeli Sande and Sam smith on my CV

@NaughtyBoyMusic good for you , well done !! I think we’ve done alright in terms of sales and I’ve happened to write on most. Keep trying ! — Louis Tomlinson (@Louis_Tomlinson) May 6, 2015

In March, Malik released his first solo single with Naughty Boy, titled “I Won’t Mind” less than a week after quitting One Direction. While the other band members had been supportive, it appears Tomlinson isn’t happy with Malik’s new direction.