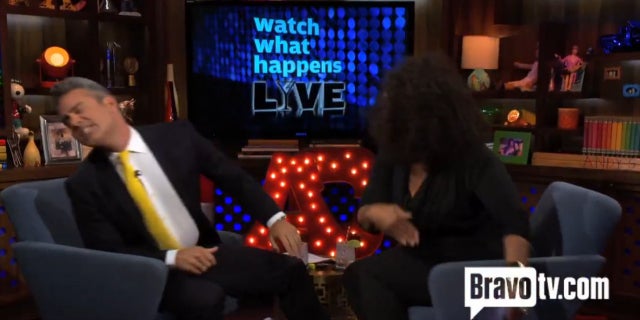 Oprah Winfrey was Andy Cohen's guest on "Watch What Happens Live" Thursday where she talked everything from "Lee Daniels' The Butler," smoking weed, her worst hairstyle ever to her approach in interviewing Lindsay Lohan versus Whitney Houston.

Oh, and she also slapped Cohen. Playfully, of course. But then she delivered a powerful line from her upcoming film.

During a playful round of Cohen's signature WWHL game "Plead the Fifth," he asked Oprah when the last time was she smoked marijiuana.

"Let’s hang out after the show," Cohen said.

Also read: 5 Reasons OWN Is Up – Including Black Viewers, Spirituality, and Lots of Oprah

Things turned serious when a Facebook fan of Cohen's accused Oprah of not taking Houston to task when she interviewed the singer before her death. Oprah strongly disagreed, saying she used the same approach with Houston as she just did with Lohan in a soon-to-be-released interview.

The OWN mogul told Cohen that for all of her big interviews she takes a private moment before the cameras roll to ask her subject what it is they want to get out of the conversation.

Houston told Oprah, "I just want people to know the truth. I'm tired of all the bullshit."

See video: Oprah Winfrey to Lindsay Lohan: Are You Addicted to Chaos?

Cohen then added that he was always waiting for her to "say something" about Michael Jackson, because he felt that Oprah knew more than she ever let on.

To which Oprah shot back, "First of all, it's none of my business. I think it's their business to reveal whatever they want to reveal."

First up, that clip. But make sure to watch the slaptastic one a little further below.

Watch Oprah talk Lohan, Houston and the King of Pop:

Watch Oprah slap Andy while reenacting a powerful scene from "The Butler":