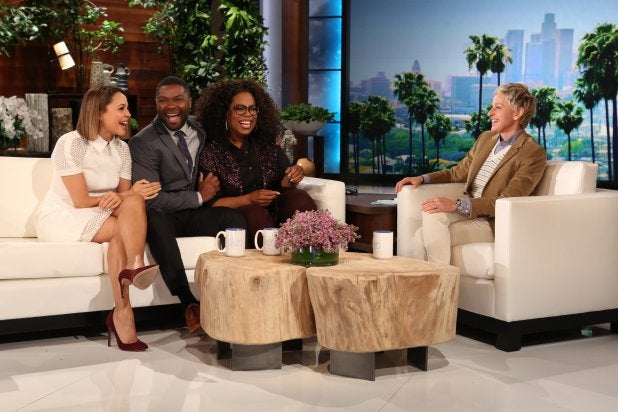 Ellen DeGeneres invited the stars of “Selma” to her show on Friday, sitting down with Oprah Winfrey, David Oyelowo and Carmen Ejogo. She talked about the power of the film, which tells the story of Martin Luther King Jr.’s voting rights marches of 1965, and how it impacted her emotionally.

“I would have marched with you,” DeGeneres said, adding that not only did she cry thoughout the film, but she could tear up just thinking about it … and in fact seemed about to do just that while talking about it.

“So many people come out of the cinema with the same reaction. It’s such a galvanizing film in that way,” said star Carmen Ejogo, who plays Coretta Scott King. “Like this very visceral reaction. And then to think that it’s all in our hands. It’s all possible within ourselves, to find that kind of heroism.”

The stars also talked about how powerful it was for them to be recreating this moment from history because people who were there insisted on being a part of it. Recreating an iconic civil rights moment for a film can have an emotional impact, but doing it alongside people who were a part of the real march in 1965 takes it to a whole different level.

“To be on that bridge with some of the people who actually did it,” David Oyelowo, who portrayed Dr. King in the film, said. “This only happened 50 years ago, so people in their 60s, 70s marched with us — insisted in the boiling heat to march with us again, because for them it was full circle.”

He then turned to his co-star and producer Winfrey and told her, “For some of them to see you there marching with them, considering who you are and what you’ve achieved, and to be right there with them was just extraordinary for everyone present.”

Oprah Winfrey, David Oyelowo and Carmen Ejogo can be seen in “Selma,” in theaters now.

The film, directed by Ava DuVernay from a screenplay by Paul Webb has been nominated for four Golden Globes, including Best Motion Picture – Drama, Best Director and Best Actor.