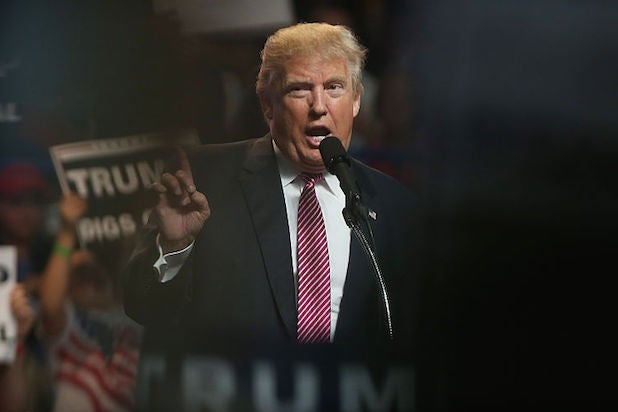 Said Trump in a statement: “the terrorist, Omar Mir Saddique Mateen, is the son of an immigrant from Afghanistan who openly published his support for the Afghanistani Taliban.”

He accused his rival Hillary Clinton of wanting to “dramatically increase admissions from the Middle East,” though there is no evidence that this is part of Clinton’s planned policies.

Trump’s statement came following the President’s speech on the Orlando massacre. Obama acknowledged there is not yet “a definitive judgment of the precise motivations of killer… What is clear is that he was a person filled with hatred.” He did not reference any Islamic extremist group by name in his speech.

Read the full text of Trump’s statement below:

Last night, our nation was attacked by a radical Islamic terrorist. It was the worst terrorist attack on our soil since 9/11, and the second of its kind in 6 months. My deepest sympathy and support goes out to the victims, the wounded, and their families.

If we do not get tough and smart real fast, we are not going to have a country anymore. Because our leaders are weak, I said this was going to happen – and it is only going to get worse. I am trying to save lives and prevent the next terrorist attack. We can’t afford to be politically correct anymore.

The terrorist, Omar Mir Saddique Mateen, is the son of an immigrant from Afghanistan who openly published his support for the Afghanistani Taliban and even tried to run for President of Afghanistan. According to Pew, 99% of people in Afghanistan support oppressive Sharia Law.

We admit more than 100,000 lifetime migrants from the Middle East each year. Since 9/11, hundreds of migrants and their children have been implicated in terrorism in the United States.

Hillary Clinton wants to dramatically increase admissions from the Middle East, bringing in many hundreds of thousands during a first term – and we will have no way to screen them, pay for them, or prevent the second generation from radicalizing.

Donald Trump accepted “congrats for being right on radical Islamic terrorism” in a new tweet just hours after the deadly massacre at a LGBT club in Orlando on Sunday.

The Republican presidential candidate initially tweeted his sympathies to the victims, but then took a more political stance following reports that gunman Omar Saddiqui Mateen had pledged allegiance to Islamic extremist group ISIS.

Mateen was known to the FBI as a suspected ISIS sympathizer, CNN reports. However, there has been no verified connection between ISIS and the mass shooting, which claimed the lives of 50 and injured 53.

Appreciate the congrats for being right on radical Islamic terrorism, I don't want congrats, I want toughness & vigilance. We must be smart!

His tweet immediately received negative reaction in some quarters, including from fellow Republicans like Meghan McCain, who took the candidate to task for self-congratulation following a “horrific tragedy.”

.@realDonaldTrump You're congratulating yourself because 50 people are dead this morning in a horrific tragedy?

.@realDonaldTrump You're the only person in America who would or could "appreciate the congrats" while families mourn 50 dead.

You are disgusting, @realDonaldTrump. Surely your supporters deserve more than your heartless idiocy. https://t.co/3fwOngA7D7

Trump quickly followed with a provocative statement calling on President Obama to reference “radical Islamic terrorism” in his statement on the massacre. “If he doesn’t he should immediately resign in disgrace!” he tweeted.

Is President Obama going to finally mention the words radical Islamic terrorism? If he doesn't he should immediately resign in disgrace!

Trump isn’t the only politician whose response to the tragedy was seen as insensitive by some.

On Sunday, Texas Lt. Governor Dan Patrick tweeted a photo with a Bible verse that read, “Do not be deceived: God cannot be mocked. A man reaps what he sows.”

Woke up to hear the devastating news from FL. As we wait for more information, my thoughts are with those affected by this horrific act. -H