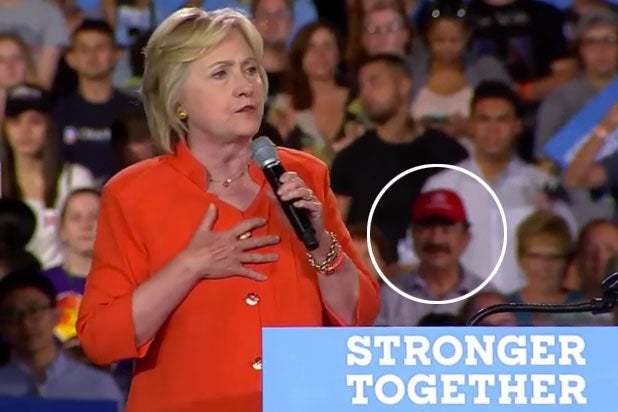 Two survivors of the Pulse nightclub shooting in Orlando were “outraged” to learn that the gunman’s father was at the same rally they attended for Hillary Clinton in neighboring Kissimmee, Florida on Monday.

Jacobi Ceballo and Christopher Hansen told ClickOrlando on Tuesday that they didn’t find out Omar Mateen’s dad was supporting the same presidential candidate mere feet away from them until they checked social media.

“I opened up my Facebook and it was the first thing I saw,” Hansen said.

Hansen was attending the rally as a guest of Ceballo, who said he was invited by a representative from the Clinton campaign. He said he and Hansen posed for pictures with the Democratic presidential nominee backstage after the event.

Ceballo now says he “would have not come” had he known Seddique Mateen would also be attending.

“I’m outraged,” he said. “For him to come back to Orlando, where his son created devastation, was also mind-blowing … I feel, like, let down.”

Hansen had a different perspective, telling Orlando’s News 6, “You can’t blame a parent for what a child has done.”

At approximately 2 a.m. on June 11, Omar Mateen opened fire on Pulse nightclub in a three-hour siege that left 49 attendees dead and 53 wounded in the worst mass shooting in recent U.S. history.

The Clinton campaign issued a statement on Tuesday, saying, “The rally was a 3,000-person, open-door event for the public. This individual wasn’t invited as a guest, and the campaign was unaware of his attendance until after the event.”

The elder Mateen expressed sorrow for the victims of the Pulse shooting in the days following the massacre, but also later said in a Facebook video that “God himself will punish those involved in homosexuality.”