The 91st Academy Awards were full of surprises, not the least of which was when Rami Malek fell off the stage after taking home the prize for Best Actor.

He got a bit of medical care, then bounced back to make a run at doing every possible post-show bash. 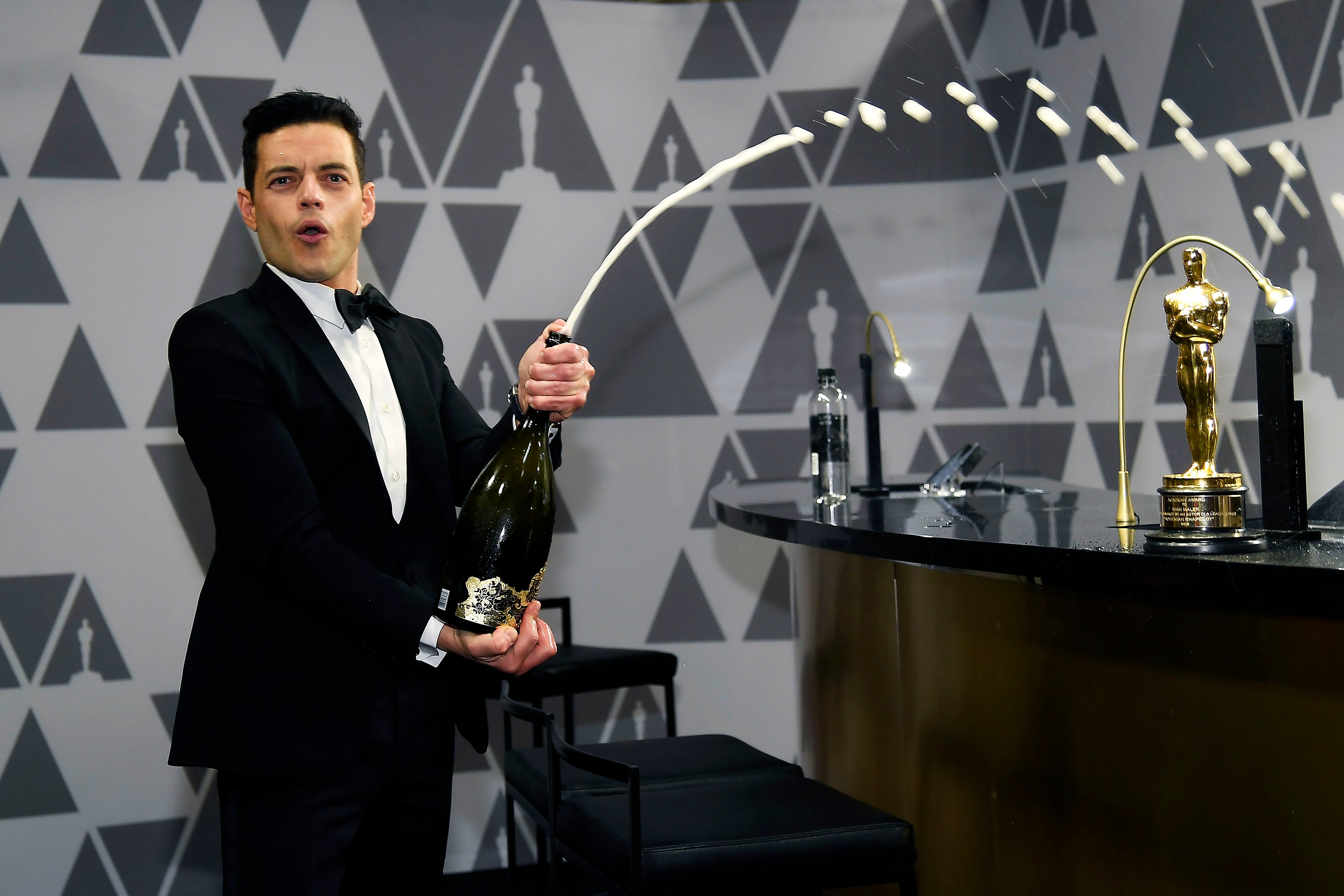 Every winner headed straight to the Governors Ball, which is held steps from the Dolby Theatre at the Ray Dolby Ballroom at Hollywood & Highland. That’s always the first stop for winners, to get the plaque engraved with that affixes to their golden man.

So as the 1,500 invitees streamed into the “Filmscapes”-themed ball, the star wattage was blinding. Director Alfonso Cuarón led the charge, letting Netflix honcho Ted Sarandos help handle one of his three “Roma” trophies, while Spike Lee and Barbra Streisand giggled over his “BlacKkKlansman” Oscar. 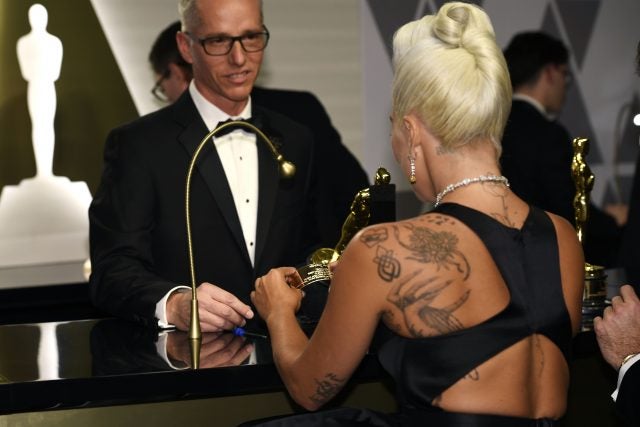 “A Star Is Born” leading actress Lady Gaga went straight to the engraving table, getting her Best Original Song prize plaque set in place for the ages, with co-winner Mark Ronson by her side. Everyone stopped to graze a bit (gotta keep up strength for the long party haul, after all) on Wolfgang Puck’s tidbits, some dusted with caviar and truffles.

“The Wife” star Glenn Close did a quick change, getting out of that heavy golden gown — which didn’t bring her the winning luck she had hoped for — opting for a more practical little black party pantsuit for making the rounds (although it too had a long train). She took off for the Vanity Fair party hosted by editor Radika Jones and found that Olivia Colman, the newly crowned queen of Hollywood, had changed too — into a creamy golden gown that matched her Oscar. 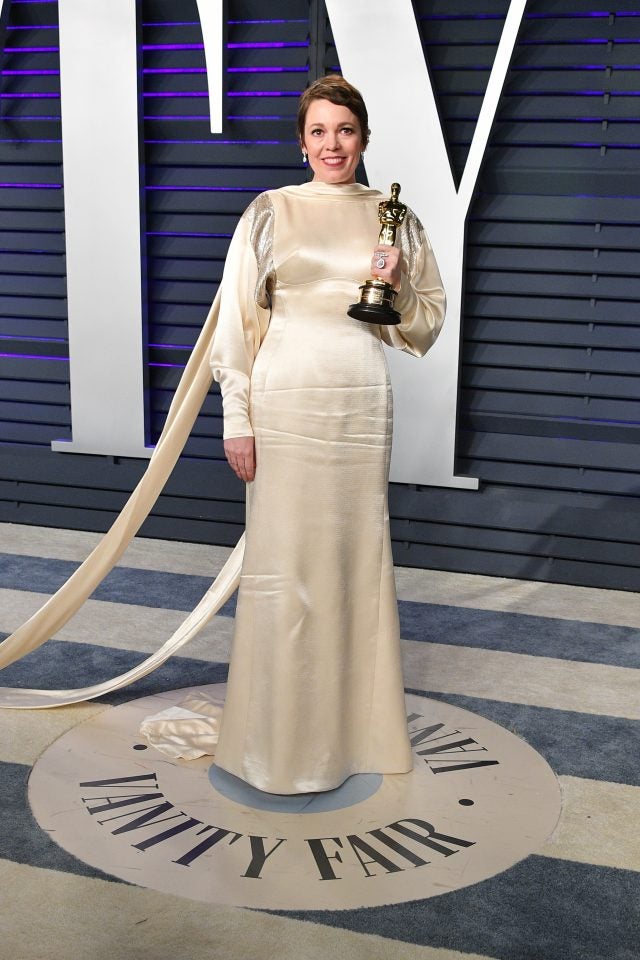 The Vanity Fair party, held in a huge tent at the Wallis Annenberg Center for the Performing Arts, was still a super-hot party despite reports of its demise.

Richard E. Grant threw off his coat and tie and got comfortable, Joni Mitchell held court in one corner and Billy Porter kept his huge hoop skirt on but peeled down on top to a diamond necklace instead of a tux shirt at the glittery party.

Supermodels like Alexandra Ambrosio, Isabell Fontana and Adriana Lima all showed a lot of skin; Kendall Jenner and Caitlyn Jenner did the same. Past winner Lupita Nyong’o was a feathery delight, while Melissa McCarthy sported an Adidas track suit and did a little dancing with husband Ben Falcone on the packed floor.

Newly minted winners roamed the red carpet, including Lady Gaga and Mark Ronson (but sans Bradley Cooper), Spike Lee, Regina King and Alfonso Cuarón; runners-up seemed care-free (it’s an honor to be nominated after all), especially Amy Adams and her husband, Darren Le Gallo, who snuggled like newlyweds despite being married for almost four years. 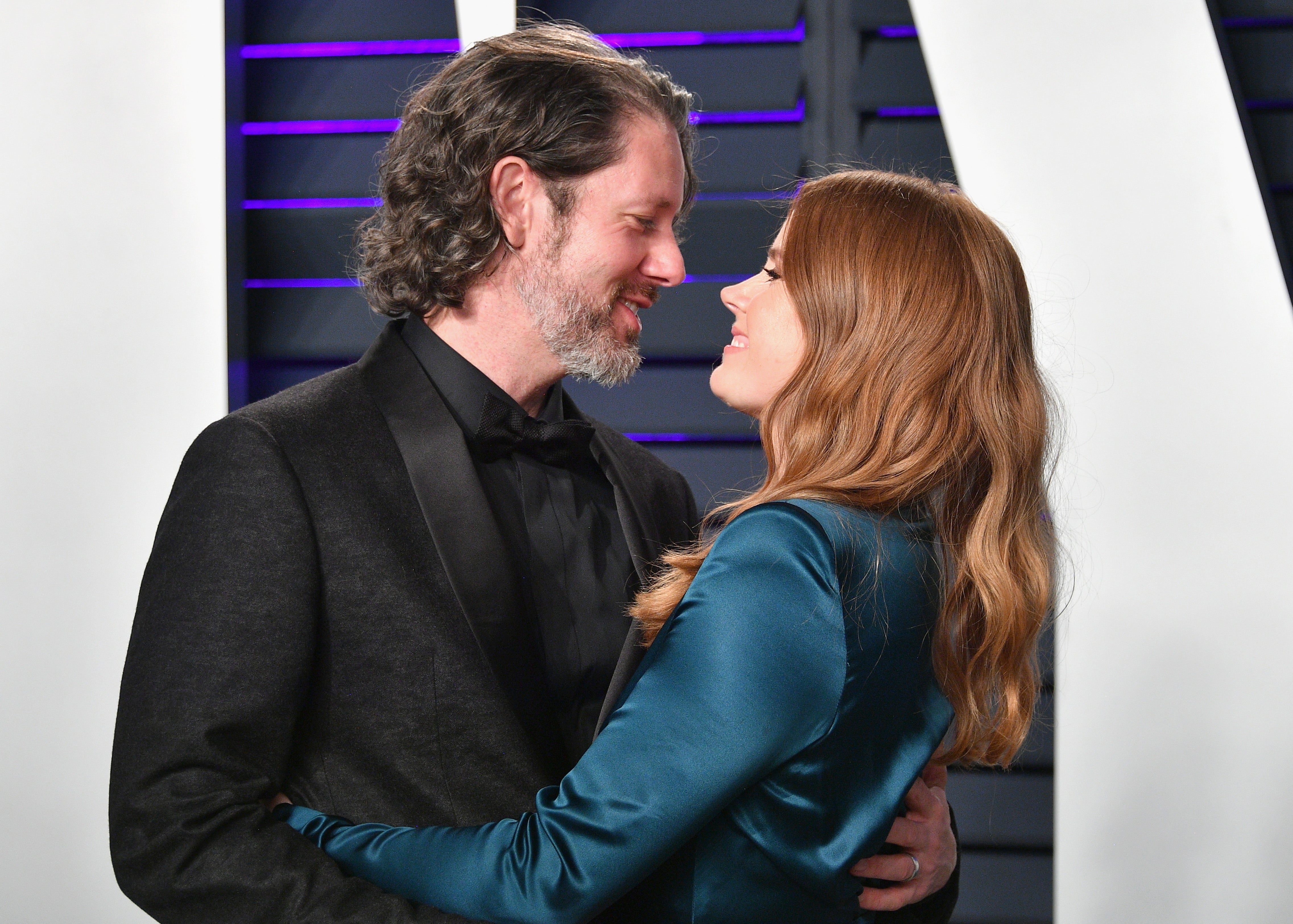 Earlier in the evening, Sir Elton John and David Furnish (who later in the night turned up at Vanity Fair) hosted their annual Oscar night gala in West Hollywood, which raised over $6.3 million on Sunday for the global effort to end AIDS.

Elton joined forces with Taron Egerton, who plays the legendary musician in the upcoming biopic “Rocketman,” for a special rendition of “Tiny Dancer,” with Egerton belting out the lyrics and John on piano. The pair exhorted the crowd to bid on the auction items offered to help the cause, featuring the Yahama piano signed and played by John at the “Lion King” 20th anniversary concert, in studio sessions for the “Devil Wears Prada Musical” in Las Vegas and Toronto, as well as at this year’s Academy Awards Viewing Party. They also shared a low-key personal moment sat on stage chatting like old friends, with Egerton wearing John’s signature oversized sunglasses. 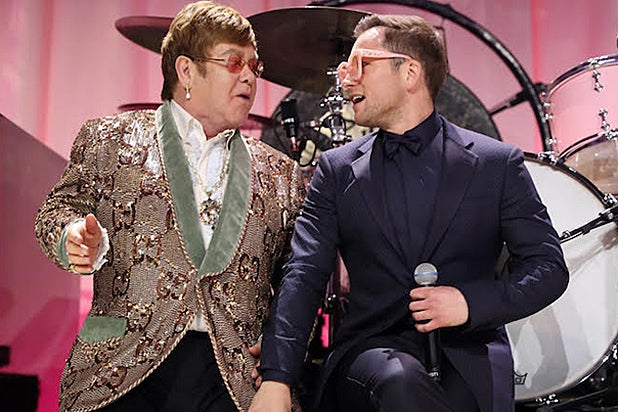 Later in the evening, all were treated to another musical set by The Killers, as people popped in from other viewing parties once the actual Oscar show was over. Late arrivers also got to witness an Elton John performance when he played piano for his 1973 ballad “Daniel,” as Killers frontman Brandon Flowers sang. 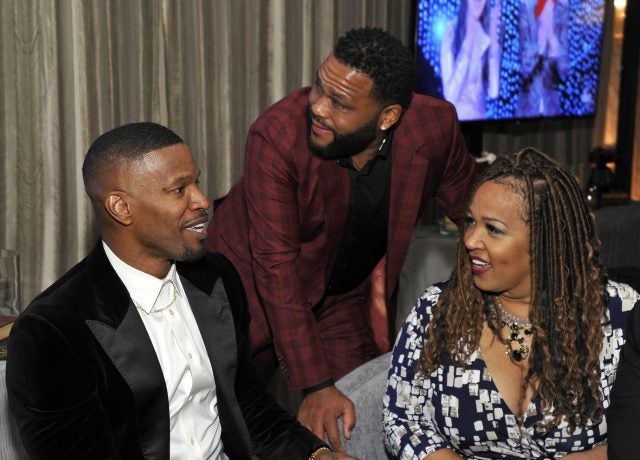 With lots of big-screen TVs, comfy seating nooks and plenty of passed sliders and tuna tacos, the noisy crowd that included Jon Hamm, Kelly Rowland, Dan Stevens, Tracee Ellis Ross, Estelle, Jessica Szohr and Mykelti Williamson were as much about each other as the broadcast.

That is, until Lady Gaga and Bradley Cooper started singing, which quieted the place. Bette Midler didn’t get nearly the same attention, but when “Green Book” took home the top prize, a stunned silence led quickly to a universal gasp of surprise that rippled across the ballroom. 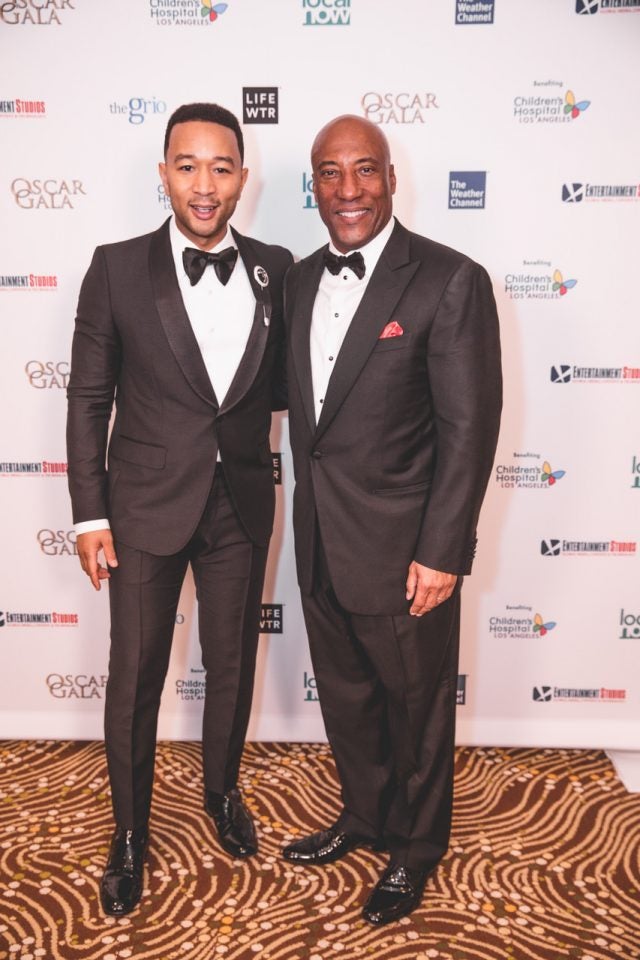 Foxx wasn’t there to hear all the shocked chatter, for he had slid down the street to the Four Seasons Beverly Wilshire Hotel, where he was actually slated to be the host of Byron Allen and Entertainment Studio’s third annual Oscar Gala.

Foxx missed most of the dinner served during the show, but was there to take the mic and get the post-show dance party going. He also introduced John Legend, who played an hour-long set, just after his wife Chrissy Teigen auctioned off a cooking lesson in their home for eight people. That was part of the Children’s Hospital of Los Angeles charity element to the evening.

Guests who enjoyed the performance by one of the few people in the world who has scored an EGOT (winning Emmy, Grammy, Oscar and Tony) included Quincy Jones, Stevie Wonder, Kathy Griffin, Jon Lovitz, David Alan Grier, Billy Gardell, Omarosa and Anthony Anderson, who had also slipped over from the Mercedes-Benz bash to hear Legend tinkle the ivories. 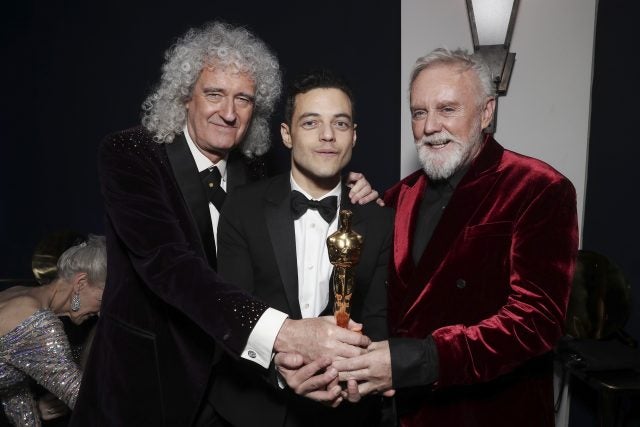 It was a Queen reunion with Brian May, Rami Malek and Roger Taylor. (Photo courtesy Fox Studios)

Across town in Hollywood, Fox and Fox Searchlight took over the Hollywood Athletic Club for their after party, but despite the massive size of that venue, they still got shut down by the fire marshal as the night progressed.

Fortunately, those two studio’s big winners got in the door, as “Bohemian Rhapsody” star Rami Malek whirled through, with Lucy Boynton, his co-star (and girlfriend, as he announced in his acceptance speech).

Queen band members Brian May and Roger Taylor celebrated there too, along with other actors from the biopic — Mike Myers and Allen Leech — and the film’s sound editing Oscar-winning duo of Jon Warhurst and Nina Hartstone. Jimmy Chin and Elizabeth Chai Vasarhelyi, Fox’s other Oscar winners for their “Free Solo” documentary, happily made the cut, too.

Once people began moving on — Malek was in and out quickly — the doors opened up again. 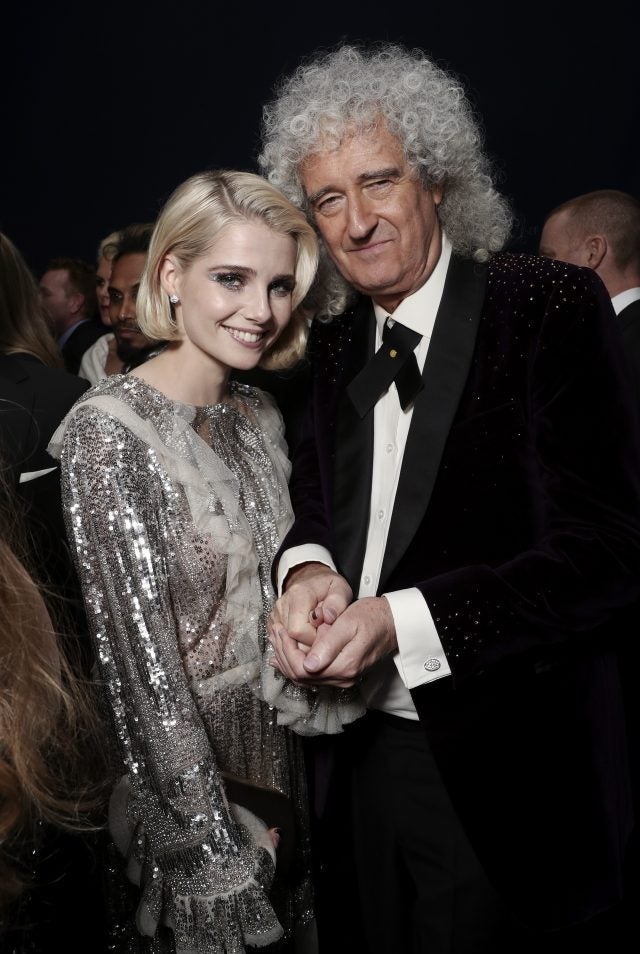 And Jay-Z and Beyoncé’s The Gold Party (named for the Armand de Brignac Gold Champagne that sponsors and flows at the bash) was once again the tightest ticket in Hollywood, as guards barred the way in.

We hear Rihanna made the cut, decked out in a puffy animal-print mini dress, as did newly engaged couple Katy Perry and Orlando Bloom, Leonardo DiCaprio, Drake, Natalie Portman, Usher and other A-plus names, as well as the guy who bounced all over town on Sunday night like a rubber ball: Jamie Foxx.