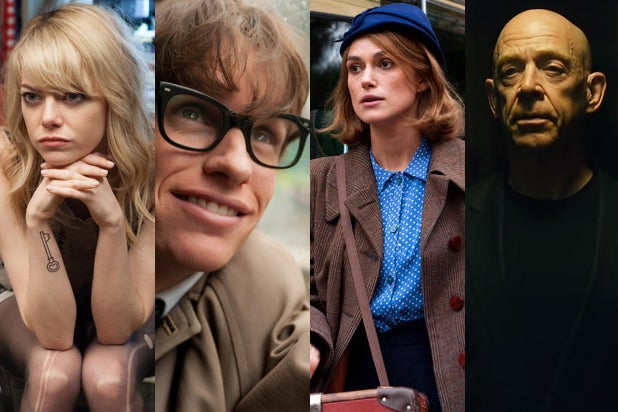 It’s an honor just to be nominated, right? Thursday morning saw a slew of Oscar hopefuls expressing their gratitude for recognition from the Academy.

Here are some of the field’s best reactions, as obtained by TheWrap:

Eddie Redmayne, Best Performance by an Actor in a Leading Role, “The Theory of Everything”:

“I’m so incredibly honored to be recognized by the Academy, and even more thrilled to share this honor with the entire family of filmmakers, cast, and crew of “The Theory of Everything.” This role was a once in a lifetime experience. Congratulations to my fellow nominees, thank you to the Academy, and thank you most of all to Stephen and Jane Hawking.”

Felicity Jones, Best Performance by Actress in a Leading Role, “The Theory of Everything”

“I’m overwhelmed at this incredible news. This is a huge, huge honor. My deepest gratitude to the members of the Academy. I’ll look forward to celebrating this with everyone involved in ‘The Theory of Everything.’ Thank you so much.”

Benedict Cumberbatch, Best Performance by an Actor in a Leading Role, “The Imitation Game”:

“I am knocked for six by this. So excited and honoured to receive this recognition. It’s wonderful to be included by the Academy in this exceptional year of performances. To ring my parents who are both actors and tell them that their only son has been nominated for an Oscalatr is one of the proudest moments of my life.”

Emma Stone, Best Performance by an Actress in a Supporting Role, “Birdman”:

“Well, this is surreal. I am completely knocked out. Thank you to the Academy for this incredible honor. I am very proud and lucky to be a part of Birdman and can’t believe it came to this. I am so f***ing excited. Are you allowed to say f*** when you’re making a statement for the Oscars? I’m just really f***ing excited.”

“I am very happy for the whole BIRDMAN flock because it took a lot of courage to make this film out of conventions. These nominations reflect the recognition of our colleagues as well as the members of the Academy. I am proud, thankful and humbled.”

“Much gratitude to the Academy for recognizing ‘The Imitation Game’ in eight categories. Telling Alan Turing’s story was the experience of a lifetime and we never thought it would lead us here. On behalf of everyone who worked on this film, in any capacity, we say thank you.”

“Without a shadow of doubt, the score for ‘Interstellar’ was Chris and I at our most collaborative. Even in this modern world of texting and emailing, sometimes all you need is a simple, type-written letter from your director to spark what undoubtedly became one of the most personal scores I’ve ever written. Chris and I make movies family-style – so much of the film’s music was written with our children in mind, and that’s what makes this honor by the Academy really special. This is as much his score as it is mine.”

“I am so proud of our whole Imitation Game family this morning. To receive a response like this from the Academy is the most thrilling professional honor of my life, and getting to be involved in telling Alan Turing’s story on screen has been the most fulfilling personal honor imaginable. This was Alan’s life; I’m so proud to have gotten to help make a film about it.”