We now know the stats for Monday’s Academy Awards Nominees Luncheon: according to an Academy press release, 14 acting nominees and all five Best Director contenders are expected to attend the annual soiree.

Vera Farmiga, Maggie Gyllenhaal and Anna Kendrick will have to represent the Supporting Actress category without Penelope Cruz and Mo’Nique (is another Internet fuss coming over that diva’s absence?), while Woody Harrelson and Christoph Waltz are the only confirmed Supporting Actor nominees.

That means that Matt Damon, Christopher Plummer and Stanley Tucci won’t have the opportunity to pick up their certificates of nomination, or to receive the oddest and most charming AMPAS gift, the Academy’s official Oscar nominee sweatshirt. 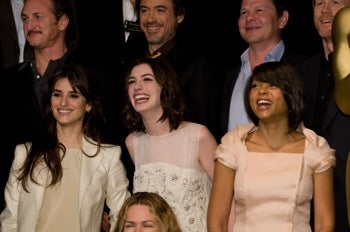 In the past week I’ve mentioned the sweatshirt – which sports a little Oscar statuette with “NOMINEE” discreetly emblazoned below – to Mulligan and to “Precious” screenwriter Geoffrey Fletcher, both of whom had the same excited reaction: “Really???”

Yep, really. (Assuming the shirts arrive on time, which after some dicey moments it now appears they will.)  That’s one of the fun parts of the Nominees Luncheon, which is certainly one of the most collegial, stress-free events on the Oscar calendar. It’s an event where seating arrangements are shuffled so that you don’t sit with anybody from your film, or anybody from your category; where a Best Actor nominee could end up at the same table with a documentarian, a cinematographer, a special effects whiz and the maker of an animated short.

It’s where everybody mingles and poses for the annual “class photo” (last year’s included Sean Penn, Penelope Cruz, Robert Downey Jr., Anne Hathaway and Viola Davis, above) and tries to enjoy the company instead of worrying about the competition.

It’s where nominees with names that fall near the end of the alphabet (Renee Zellweger in the past, Hans Zimmer this year) need to make sure they wear comfortable shoes – since after everyone goes to a set of risers for the photo, they remain standing until their names are called (alphabetically) to receive their certificates and sweatshirts.

It’s where life-of-the-party Catherine Keener, when she was nominated for “Capote,” spent so much time table-hopping that she never actually got around to eating her lunch; at the end, Keener, who’d donned her nominee sweatshirt because she was cold, announced, “I’m starving! I’m going to In ‘N’ Out Burger!”

It’s where, in 2000, “South Park” creator and Best Song nominee Trey Parker showed up after spending the weekend in Las Vegas. “I was in a strip club in Vegas at four o’clock this morning,” he told me. “I do remember looking up at a stripper and yelling, ‘Hey, you wanna go with me to the Academy Award Nominees Luncheon tomorrow?’ And she looked down and yelled, ‘Sure!’” (He opted for his more presentable assistant instead.)

And it’s where the producer (or producers) of the Oscar show get to address the nominees, generally using their time as an opportunity to plead for short speeches.

In 2001, for instance, Gil Cates announced at the luncheon that he was giving a high-definition TV to the winner who made the shortest speech. (The winner, Dutch filmmaker Michael Dudok de Wit, wasn’t even at the luncheon and didn’t know about the offer. “I have many television sets,” he said, after giving his prize to charity.)

The following year, Laura Ziskin gave out silver hourglasses containing exactly 45 seconds worth of sand, for nominees to use while practicing their speeches. It didn’t really help; Ziskin’s show was the longest in Oscar history.

The tradition of the Nominees Luncheon was launched in the early ‘80s, when it was initially envisioned as little more than one more Oscar photo-op. “Somebody thought there was a lull in the publicity between the nominations announcement and the show itself,” executive director Bruce Davis once told me. “It was originally proposed, I think, out of fairly cynical motivations.”

The event, though, was an immediate hit. “Everybody says it’s a great honor to be nominated,” said Davis, “but the only time we ever bring the people together is on this terrible night when four out of five of them will walk away feeling like they’ve lost something.”

AMPAS says that more than 120 nominees are expected to attend on Monday, which would be one of the biggest turnouts ever for an event that usually attracts a little more than 100 nominees, plus guests, Academy and show officials, and members of the board of governors.

In a stab at social networking, the Academy is offering visitors to its Facebook page the opportunity to pose questions to the stars who’ll be stopping by the press room; they’re not saying how many reader questions they’ll use, just that the best ones will be asked of the nominees.

And if you want to watch your question being asked, the Academy will be streaming the luncheon live on the internet for the first time. Details are here.