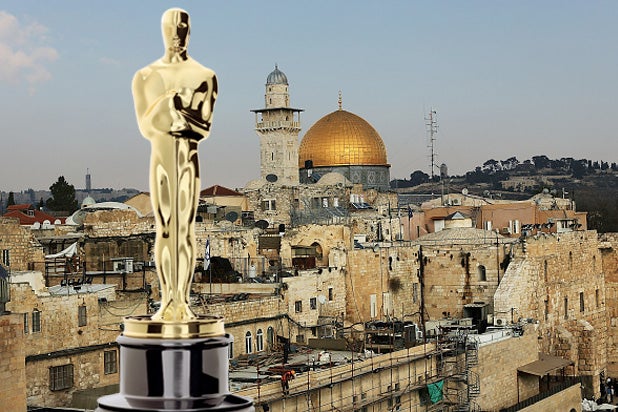 Swag has become a part of our modern-day lexicon, yet most people don’t know what it means. “Stuff We All Get” is anything but — because in the case of the Oscars, “we” don’t get it. These opulent gift bags worth in excess of $200,000 (almost 4 times the combined typical annual salary of American families) go to the few nominees who are up for the main acting and directing categories. According to The Daily Beast’s Matt Wilstein, “Don’t think for a second that anyone who spent their life savings on a nominated Best Documentary Short is going home with a $5,000 home spa system.”

Swag has been a part of the Oscar hype for years. The Oscar brand is a trademark that should be protected. However, it’s not only the Oscar logo that’s allegedly being hijacked. A movement known as BDS (Boycott, Divest and Sanction), whose purpose is to block trade and boycott products from Israel, has co-opted this lawsuit and turned a copyright issue into a blockade of Israel because of that voucher for a $50,000 first-cabin trip to Israel.

The shift of focus is part of a skilled yet nefarious PR campaign by anti-Israel activists who overwhelm social media channels in order to deny American and European children the services of Israeli doctors and the biotechnology that they bring with their treatments — such as a recent Israeli medical breakthrough that forces an extremely virulent form of leukemia into remission. BDS activists would want California farmers to experience another dust bowl by denying them desalination technology that is now working to save California’s agricultural industry. BDS activist would rather see wounded military veterans remain limbless than have access to robotic limbs developed by Israelis.

The BDS movement is now trying to turn the Academy’s branding dispute over unauthorized gift bags into a sociopolitical one. This is their game, and they play it well. The efforts of Pink Floyd’s former bassist Roger Waters have largely fallen flat. Artists like Paul McCartney, Bon Jovi, Mick Jagger, etc. have told Waters to pound sand — Israeli sand, and have gone on to play in front of diverse audiences in Israel. Waters also played to Israeli audiences before he decided to mount a campaign against Israel. The strategy of taking Israeli’s money before boycotting them couldn’t be more transparent.

This is not about swag, it’s about skag — where anti-Semitism is the heroin that threatens to inject the motion picture industry with an overdose of hate. Those who are caught up in the anti-Israeli movement are blithely unaware of the number of Arabs that preside in the Knesset, or the fact that the latest elections in Israel were overseen by an Arab judge of their Supreme Court, or of the thousands of Palestinian jobs that they threaten with their boycotts, and of the countless children who would die if not for Israeli medicines, biotech, and doctors.

The same Israeli doctors who save the lives of Palestinian children, repair the deformities of the children of their enemies, and put themselves in danger by crossing borders to treat Syrian refugees are in the crosshairs of a hateful movement — and we are concerned with a swag bag?

Jill Hoyt, director of Creative Community for Peace, whose board of directors includes some senior executives in the music and entertainment industries, said, “To demonize Israel over an Oscar swag bag that is not even endorsed by the Academy is no way to help Palestinians end occupation, improve social justice, achieve statehood and self-determination, or the building of a civil society.”

Jill knows whereof she speaks. Creative Community for Peace is an entertainment industry organization that was founded to promote music and the arts as a bridge to peace and act as a counter-force to the organized effort to discourage, dissuade and hamper artists from performing in Israel. They do so in the name of artistic freedom and with the conviction that boycotting Israel is a form of censorship and discrimination.

Where Roger Waters and BDS groups try to block artists from performing in Israel, CCFP creates opportunities for artists “to perform with Israelis and Palestinians who desperately want peace. We invite artists to be a part of the solution.”

BDS activists are not really concerned with any solution that helps Palestinians or the building of a civil society. According to Ira Forman, the Obama Administration’s Department of State Special Envoy to Monitor and Combat Anti-Semitism, the BDS movement “is more about the elimination of Israel than the boycotting of Israel.”

The thinly disguised wolf in sheep’s clothing is nothing but a virulent and shameful version of anti-Semitism. The BDS movement is not afraid to attach itself to any crisis or issue in order to leverage it against Israel.

I’m actually jealous of those who receive the swag bag and take advantage of the trip to Israel. It’s gonna be incredible. You’ll be left with memories worth far more than the $50,000 value of your Israel experience.

Make sure you swim in the Mediterranean with the same fun people that I did — Russians, Ethiopians and Asians. Visit any one of the many Arab owned fish houses and restaurants and enjoy the camaraderie that comes with good food and friendship. Visit historic Christian churches in Jerusalem, and listen, as I have, to the beautiful call to prayer from architecturally stunning Muslim mosques from my perch in Old Jaffa. Float in the Dead Sea while reading the Times of London. Have some strong Turkish coffee with any of the Arabs, Europeans, Africans, Americans and other people of the world that walk the beautiful streets freely.

The politics of hate have arrived squarely on the doorstep of the motion picture industry, in the form of opulence and excess, bundled in a $200,000 swag bag. For recipients of the gift bag, that will be all they take away from the Academy Awards ceremony — along with the 1099 from the Internal Revenue Service that will report the prizes as earnings.

Jerry Lewis Improvises Oscars Finale for 20 Minutes (1959)< /b> Lewis hosted the show in 1959, but for some reason, the show ended 20 minutes early, so he improvised a monologue for the rest of the show, which was joked about for many years after that.
View In Gallery
BIO Richard Stellar
Winner of the Los Angeles Press Club's best blog award and a Southern California Journalism Award for his HollyBlogs, as well as an award for the Facebook group that helped to muscle the salvation of long-term care for the motion picture and television industry, Stellar's "vituperative blog on TheWrap" (Vanity Fair) focuses on issues related to the motion picture and entertainment industry. Stellar is founder of The Man/Kind Project, Inc., a 501(c)(3) corporation whose mission is to fight religious and cultural intolerance through the arts while building bridges of tolerance for all people. Stellar lives in Woodland Hills, California, with his wife of over 30 years, Nuala, and much too much Beatles memorabilia.