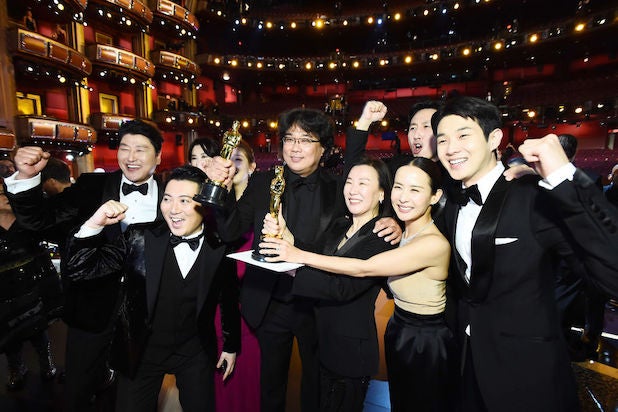 Bong Joon Ho’s “Parasite” won Best Picture and made history by winning four Oscars, the first for any Korean film and the first non-English language movie to win Best Picture. So how does Bong really feel about his victory?

“It’s really f—ing crazy!” Bong said backstage. All season he’s been going around with his interpreter Sharon Choi, but he didn’t need an interpreter for that one.

Bong and producer Kwak Sin Ae came back late to the Oscars press room at the Loews Hollywood Hotel, brandishing their four Oscars for “Parasite,” and they both agreed that they’re still waiting to wake up from some sort of dream.

“I can’t imagine the atmosphere in Korea and what will happen when we get back,” Kwak said.

Bong’s previous film, “Okja,” was a co-production between Hollywood and Korea, but he said this film is making him rethink the types of films he wants to make, to pay more attention to his surroundings and tell more local stories in the hopes that future films might be received the way “Parasite” has.

But Bong also added to his comments he made onstage at the Golden Globes, about how audiences need to overcome the “one-inch barrier” of subtitles. Now that his film has won, he realizes that maybe people already have.

“I feel like I was already a little late. People already were overcoming these barriers, from streaming services, YouTube, social media. And in the environment that we’re currently living in, I feel we’re all connected,” Bong said. “So naturally, I feel we will come to a day when a foreign language film or not, it doesn’t matter. A foreign language film like this won’t be much of an issue hopefully.”

Here are some other things you didn’t see on TV from the Oscars broadcast:

Brad Pitt Is Ready to ‘Disappear For a Little While’

Now that awards season has come to an end and Brad Pitt has won virtually all the awards, including tonight’s Oscar for Best Supporting Actor, he’s ready to get out of the spotlight for a little while. Speaking backstage in the Oscars press room, Pitt was asked if this has been the best time of his life.

“Uhhh… no, I hope not. I hope I got other s— going on. But it has been a really special, really special run,” the “Once Upon a Time…in Hollywood” star said, adding that he wanted to avoid taking a victory lap. “I think it’s time to go disappear for a little while now and, you know, get back to making things.”

Pitt admitted that although he’s an A-list star, being in front of massive crowds is not necessarily his thing. He had skipped out on the Golden Globes press room earlier this year, so his appearance as the first person backstage was a welcome surprise to an eager press room.

Taika Waititi Demands the WGA ‘Do Something’ About Apple’s Keyboards

Hollywood is buzzing about what could be an impending writers strike, so as the winner of both the WGA prize and the Oscar for Best Adapted Screenplay, Taika Waititi had some very strong thoughts about how the WGA should act and respond to a crisis in the industry.

He’s got shoulder problems you know, and he proceeded to give a brief anatomy of the human vertebrae. We would know; we’re all journalists hunched over Mac laptops. He even took an informal poll of the room and found that very few were actually working on PCs.

Waititi also joked that his acceptance speech was the most “truthful” of all the winners that evening because he didn’t take the time to thank his agents and lawyers.

“If I have to go up, I’m not going, ‘Thank you.’ Because why should I? I did all the typing. No one else did it. And all the words came from my head,” Waititi deadpanned. “So, bottom line, I’m not going to thank my lawyer for that. I love him. He’s done great stuff for me, he got me a bloody good deal on ‘Thor: Love and Thunder,’ but he didn’t type anything on ‘Jojo Rabbit.'”

Even if he lost though, he said his movie was validated when Mel Brooks gave his film the “seal of approval” at the AFI luncheon in front of all of Hollywood.

“This whole awards season can go down the drain as far as I’m concerned,” his producer told him. “This is our Oscar.”

Among all the Oscars ideas that have come and gone in the past few years for the Oscars, one idea that has picked up steam is the idea to merge the categories of Sound Mixing and Sound Editing.

After winning the Oscar for Sound Mixing for “1917,” Mark Taylor, along with Stuart Wilson, said they would support the merger.

“100 percent behind that,” Taylor said. “The difference between sound editing and sound mixing has become so blurred now. There’s so much input from sound editors prior to us getting something mixed that I think it’s a good thing. 100 percent.”

Between his Oscar win and FaceTiming with his children in Australia, Elton John managed to sneak in two questions with the press room. But he begged, please don’t forget about Bernie Taupin. John already had an Oscar, but this particular award, he stressed, was for Taupin.

“This is for him. This is for my partner of 53 years. Without him, I wouldn’t be here,” John said. “This is the man who started the journey.”

“It’s like a marriage, it really is,” Taupin added. “And one of the things that makes it work is being different, having different lives, leading different lives. But we always come back together for the music. Music is the thing that has run through the bloodlines of our veins ever since we first met.”