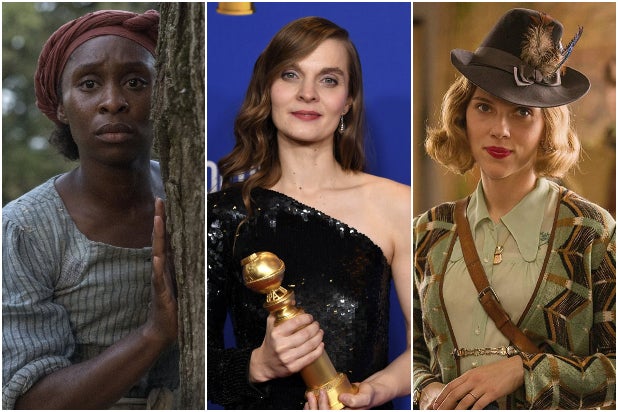 Despite the outcry over a second straight year without a woman nominated for Best Director, the Academy showed record progress in gender parity on Monday: Women made up 31.1% of this year’s Oscar nominees, the highest percentage ever.

In TheWrap’s analysis, individuals nominated in multiple categories, like Scarlett Johannson for “Marriage Story” and “Jojo Rabbit,” Cynthia Erivo in the Best Actress and Best Song, or Bong Joon-ho for Best Director and Best Screenplay, were counted for each of their nominations. (The count also does not include nominees in Best International Film, which officially goes to the country of origin.)

One of the biggest gainers this year was in female producers on Best Picture nominees. Nine of the 24 nominated producers were women, with Emma Tillinger Koskoff receiving nominations for both “The Irishman” and “Joker.” Last year saw only five female producers out of 25 nominated for Best Picture, and just eight of 30 the year before that. 2016’s crop of films however also produced nine female nominees, but from 30 overall.

Women also saw other gains in below-the-line categories like Best Documentary Short Subject and Best Costume Design. And Hildur Guðnadóttir, the composer for “Joker,” became only the seventh woman ever nominated in that category.

While the number of female nominees is encouraging, the Academy just barely avoided another #OscarsSoWhite situation by nominating just one actress of color: “Harriet” star Cynthia Erivo in Best Actress. Among the big five categories across acting and directing, there were only two people of color nominated, Erivo and Bong (Antonio Banderas is of Spanish heritage). Each of the last two years, 24% of the nominees were people of color, compared to just 8% this year.

Erivo set another achievement, being only the third person (and third in a row) to be nominated for both Best Actress and Best Original Song, the others being Lady Gaga for “A Star Is Born” and Mary J. Blige for “Mudbound.” Erivo could also become the youngest EGOT winner ever if she were to win for either category.

The Oscars take place Feb. 9. Check out the full list of nominees here.