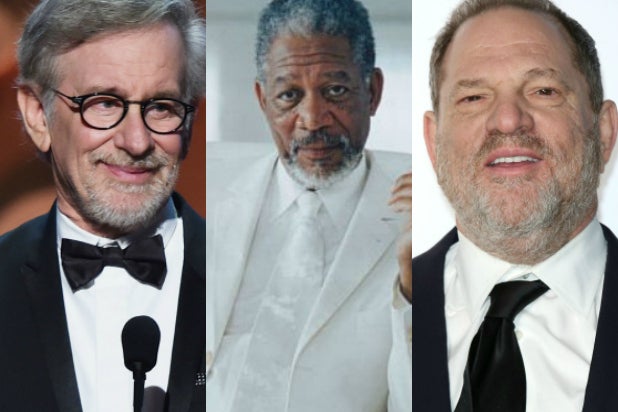 Sorry, God: You’re No. 6 on the list of individuals historically thanked in Oscars acceptance speeches — apparently you just can’t complete with the likes of Harvey Weinstein and Steven Spielberg, among other Hollywood heavy-hitters.

Spielberg is the most-thanked person ever during Academy Award podium time — the “Saving Private Ryan” director has been acknowledged a whopping 42 times, according to a study by Vocativ. Weinstein — who produced “Shakespeare in Love” — is the runner-up, scoring 34 of his own “Thank Yous.”

In third place historically is “Titanic” director James Cameron, with 28 thanks. “Star Wars” visionary George Lucas is fourth with 23, Peter Jackson (“The Lord of the Rings”) is in fifth place, just one nod behind.

Next up is God, pulling in 19 grateful mentions — readers can add one more for a thanks to “Jesus.”

Rounding out the Top 10 are Fran Walsh (18), Sheila Nevins (17), and a tie between Francis Ford Coppola and Barrie Osborne, both with 16.

Honorable mentions are Martin Scorsese and Saul Zaentz, who had 15 apiece.

Also Read: ‘What’s the Deal?’ With Betting on the Oscars: 12 Dark Horses That Could Win You Money (Video)

Vocativ went through all 1,396 Academy Award acceptance speeches for the data. Read the full story here.