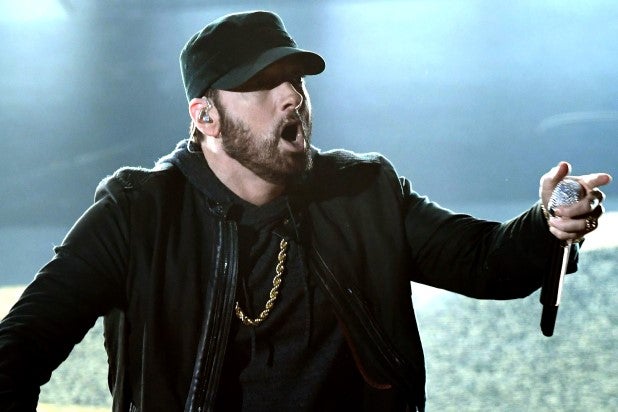 Eminem took the stage at the 92nd Academy Awards and surprised everyone when he started rapping “Lose Yourself,” 17 years after he won his own Academy Award for the “8 Mile” track — and the audience was full of shock and awe.

Martin Scorsese looked unimpressed, Idina Menzel was confused and Brie Larson was having the best time.

Marshall Mathers took to Twitter to thank the Academy for letting him do his thing — since couldn’t make it to the 2003 ceremony where he received his award. He has since explained why he didn’t go — in part because he thought he wouldn’t win. Read more about that here.

“Look, if you had another shot, another opportunity… Thanks for having me @TheAcademy,” he tweeted. “Sorry it took me 18 years to get here.”

His performance received a standing ovation.

Clowns on Twitter are posting reaction pictures of people apparently being "confused" about Eminem performing at the #Oscars. That's not what happened though. They was loving it. Only legends get this level of respect: Watch below! #eminem pic.twitter.com/YHnmFa1JdO

Eminem dropped his last few studio albums by surprise. The latest, “Music to Be Murdered By,” came out on Jan. 17 with no pre-promotion.

See below for the best reactions.

Eminem on the #Oscars , a reaction thread. pic.twitter.com/dmOP53XyjJ

Kelly Marie Tran rapping along to Eminem's "Lose Yourself" at the #Oscars #Oscars2020 pic.twitter.com/fZmWYsqEkX

Idina Menzel being all of us when Eminem came up through the floor. pic.twitter.com/oWh7Pp2FoW

Some of the #Oscars crowd was super into that surprise Eminem performance. https://t.co/8kz7m5vtnF #Oscars pic.twitter.com/GMcLHMyz00