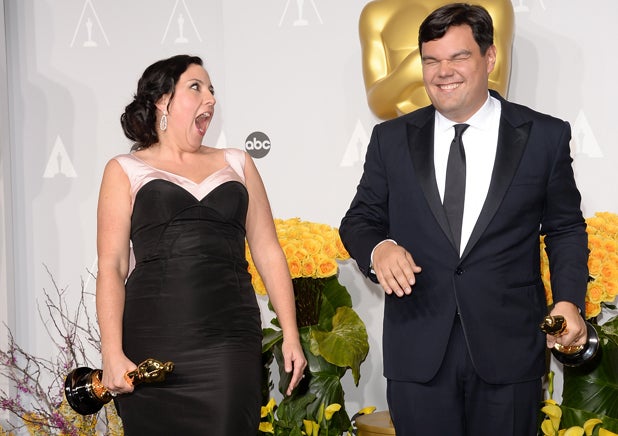 Backstage, his wife and fellow Academy Award winner, Kristen Anderson-Lopez, presented him with a flashy bauble to go along with Best Original Song Oscar for “Frozen — a pasta necklace that spelled out EGOT.

“Every award I’ve been fortunate enough to win has been won with a really amazing collaborator,” Lopez said, noting he was pleased his wife shared his honor and “is finally getting credit for being the amazing artist that she is.”

Anderson-Lopez said that one of the most rewarding aspects of creating an anthem like “Let It Go” has been the messages she has received from listeners, crediting the inspiring song with keeping them from committing suicide or getting through chemotherapy.

“That is so meaningful to us that our song can give hugs to people like that,” she said.

Lopez is the youngest person to have won the major awards superfecta EGOT, a term coined by first winner Richard Rodgers.

He started on the EGOT journey in 2004 Tony for Best Original Score for raunchy puppet comedy “Avenue Q.” Lopez next won the Daytime Emmy for Best Music Direction and Composition for “The Wonder Pets” in 2008, going on to win  the 2012 Grammy for Best Musical Theater Album for “The Book of Mormon,” which he developed with “South Park” creators Trey Parker and Matt Stone. Sunday night’s Oscar win rounds out the EGOT.

L.A. Ross contributed to this report