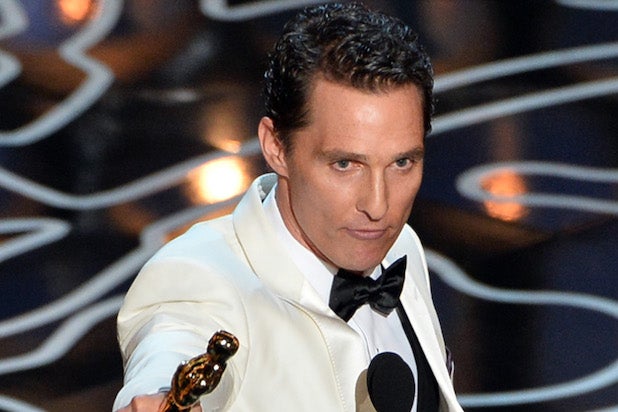 Everything is alright, alright, alright in Hollywood, as the McConaissance of the last several years culminated with Matthew McConaughey winning an Oscar for his devastating performance in “Dallas Buyers Club” Sunday night.

McConaughey gave his wife a passionate kiss before embracing co-star Jared Leto, then he received a quick peck on the cheek from his fellow nominee and “Wolf of Wall Street” co-star, Leonardo DiCaprio.

After thanking the Academy, Leto, co-star Jennifer Garner and director Jean-Marc Vallee, the Texas native revealed the three things he needs each day.

“I need someone to look up to, something to look forward to and someone to chase,” said McConaughey.

McConaughey, who spent years doing romantic comedies that concealed the true depths of his talent, made certain to thank his father for “teaching him what it means to be a man.” He pictured his father dancing in his underwear, eating gumbo and drinking a cold Miller Lite.

Not to be outdone, McConaughey’s mother was also thanked — for demanding that her children respect themselves so they could respect others.

McConaughey also revealed that his hero is himself… in 10 years.

“Every day, every week, every month, every year of my life — my hero is always 10 years away. And that’s just fine with me,” the Oscar-winner said. “It gives me someone to keep chasing.”

The “Dallas Buyers Club” star, who lost about 40 lbs. for the role of an HIV-positive cowboy, ended his speech by imploring the audience to “just keep livin’,” which also happens to be both his personal motto and the name of his production company.