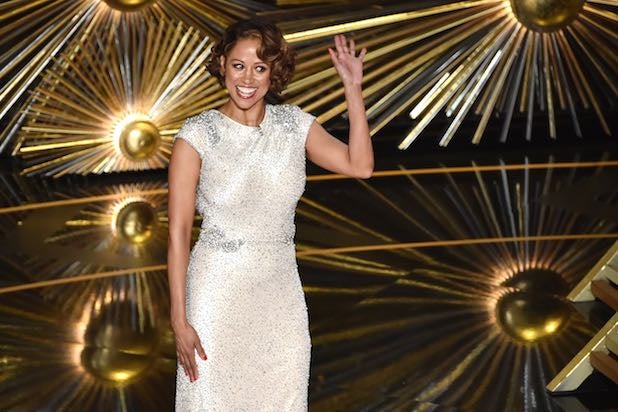 Stacey Dash just made an appearance at the Oscars, and it may go down as the most awkward moment of the evening.

The “Clueless” actress, who is now making a name for herself by giving her opinions about things on Fox News, was welcomed to the stage by host Chris Rock after a very funny sketch imagining black actors in some of the year’s biggest movies.

“I cannot wait to help my people out,” she declared to little (if any) laughter or applause from the various stars populating the Dolby Theatre.

Then she walked off stage, and the show went on.

The surprise appearance was a nod to her controversial statement on Fox News last month that “there shouldn’t be a black history month” because “we’re all Americans, period.”

See Video: Gabrielle Union Throws Epic Shade at Stacey Dash: 'Who Is That?'

Dash gave the unpopular opinion when “Fox & Friends” co-host Steve Doocy asked for her thoughts on the #OscarsSoWhite uproar.

“I think it’s ludicrous,” Dash said. “We have to make up our minds. Either we want to have segregation or integration, and if we don’t want segregation, then we have to get rid of channels like BET and the BET Awards and the Image Awards, where you’re only awarded if you’re black.”

Also Read: BET Rips Stacey Dash for Being a Hypocrite: 'Can We Get Our Check Back?' (Photos)

As BET pointed out shortly after, Dash was employed by the very network she suggested getting rid of on a show called “.”

Dash expanded on her anti-Black History Month position in a blog post, in which she argued, “Our accomplishments cannot be limited to 28 days.”

“Do not listen to liberals who try to limit you, to put you into a box, to tell you that you MUST believe one way or another, that you cannot think for yourselves, and that the government can ‘give’ you a ‘special month,'” she wrote. “No. I am sick of settling for breadcrumbs.”

Watch a the awkward moment in the video below: