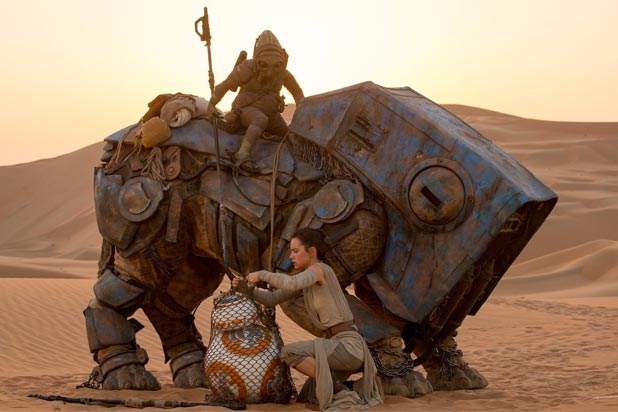 “Star Wars: The Force Awakens,” “Ex Machina,” “The Walk,” “The Martian” and “Mad Max: Fury Road” have advanced to the shortlist in the Oscars race for Best Visual Effects.

Also on the 10-film shortlist, which was determined by the Visual Effects Branch Executive Committee: “Ant-Man,” “Avengers: Age of Ultron,” “Jurassic World,” “The Revenant” and “Tomorrowland.”

The films were chosen from an earlier group of 20 chosen by the committee and announced on Dec. 7. From that earlier list, “Bridge of Spies,” “Chappie,” “Everest,” “Furious Seven,” “The Hunger Games: Mockingjay – Part 2,” “In the Heart of the Sea,” “Jupiter Ascending,” “Mission Impossible: Rogue Nation,” “Spectre” and “Terminator Genisys” all failed to make the latest cut.

The shortlisted films are listed below in alphabetical order:

All members of the Visual Effects Branch will now be invited to view 10-minute excerpts from each of the shortlisted films on Saturday, Jan. 9.  Following the screenings, the members will vote to nominate five films for final Oscar consideration.

The 88th Academy Awards nominations will be announced live on Thursday, Jan. 14, at 5:30 a.m. PT at the Academy’s Samuel Goldwyn Theater in Beverly Hills.