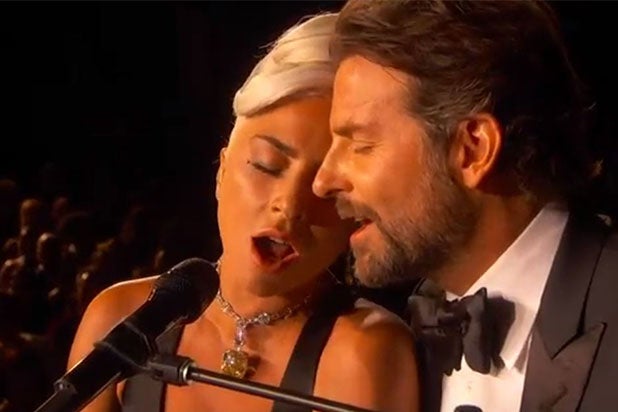 Bradley Cooper and Lady Gaga performed their duet, “Shallow,” from their movie, “A Star Is Born,” at the 91st Academy Awards on Sunday night.

Cooper and Gaga started singing the ballad face-to-face before Gaga got up to perform her part of the duet on the piano. Cooper later joined her to harmonize, ending in a loving embrace.

Shortly after the performance, the song won Best Original Song. “A Star Is Born” is nominated for a total of eight awards, including Best Picture, Best Actor and Best Actress.

In “A Star Is Born,” Gaga’s character, Ally, writes a song when she meets Cooper’s Jackson Maine, and he brings her on stage to sing that song together at one of his shows.

In the film, Cooper plays a seasoned musician who discovers Ally (Gaga), a struggling artist. She is about to give up on her dream of singing until Maine coaxes her into the spotlight. But when Ally’s career takes off, Maine has to fight against his own inner demons. Cooper also directed and co-wrote the film with Eric Roth and Will Fetters.

Cooper and Gaga joined Jennifer Hudson singing “I’ll Fight” from “RBG,” Bette Midler singing “The Place Where Lost Things Go” from “Mary Poppins Returns” and Gillian Welch and David Rawlings performing “When a Cowboy Trades His Spurs for Wings,” as originally sung by Tim Blake Nelson in “The Ballad of Buster Scruggs.”

Watch the performance below.