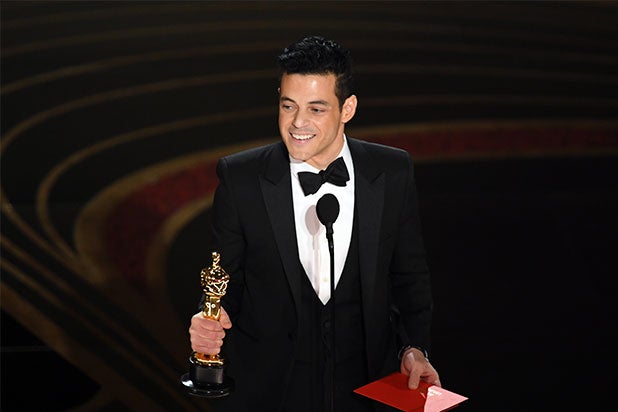 Shortly after Rami Malek won the Best Actor award at the 91st Academy Awards for his portrayal of Freddie Mercury in “Bohemian Rhapsody,” the actor took a moment to talk about his own upbringing and how he struggled with his own identity growing up.

“I think about what it would’ve been like to tell little bubba Rami that one day this might happen to him and I think his curly haired little mind would be blown,” Malek said on stage. “That kid was struggling with his identity, trying to figure himself out, and I think to anyone struggling with theirs and trying to discover their voice, listen: We made a film about a gay man — an immigrant — who lived his life unapologetically himself, and the fact that I am celebrating him and this story with you tonight is proof that we’re longing for stories like this.”

He added, “I am the son of immigrants from Egypt, I’m a first generation American and part of my story is being written right now, and I could not be more grateful to each and every one of you and everyone who believed in me for this moment. It is something I will treasure for the rest of my life.”

Malek also thanked Queen in his speech, saying, “Thank you for allowing me to be the tiniest part of your phenomenal, extraordinary legacy — I am forever in your debt.”

Malek was nominated in the category alongside Bradley Cooper (“A Star Is Born”), Christian Bale (“Vice”), Willem Dafoe (“At Eternity’s Gate”) and Viggo Mortensen (“Green Book”).

In a heartfelt speech, Oscar winner Rami Malek praises his mom, says he knows his dad is looking down on him, thanks Queen, and says the world "is longing for stories" about people being "unapologetically" themselves.