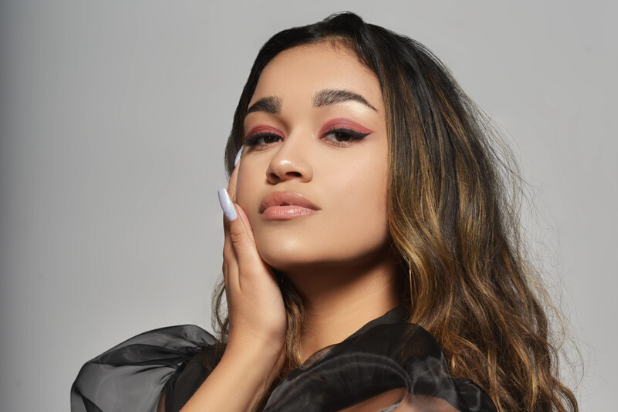 For those of you who haven’t seen “Outer Banks” (OBX),  it’s basically “The O.C.” meets “One Tree Hill” but with mystery. As a group of guys from the wrong side of town, “The Pogues” spend their summer on a treasure hunt with their best girlfriend Kiara, I can’t help but feel the sun on my face and wonder, “Where can I get friends like these and how is this Kiara girl so cool?”

Searching for answers, I went on a treasure hunt of my own and discovered exactly what I suspected all along — Madison Bailey, the actor who plays Kiara, is even cooler than her on-screen character. And if that’s not enough to make you go “full pogue,” we’re thrilled to announce that Bailey is also now a WrapWomen Next-Gen Ambassador!

During a recent interview with WrapWomen, Bailey took us behind the scenes of the new Netflix show, shared her favorite memories from the set and revealed how her cast members are supporting each other now more than ever during quarantine.

Your favorite memory from set is…

There’s really too many to pinpoint but there was a day we were filming on the water and we were anchored on the beach, just laying out and playing with hermit crabs. It was a moment that I definitely reflected on like, “Wow this is really my job.”

Who is your favorite character from “OBX” and why?

My favorite character is JJ, played by Rudy Pankow. He has such a real struggle with his family, yet is still so loving. He’s always good for a laugh or when you need backup.

Are you similar to your character Kiara in real life?

I have so many different sides to me. I think being an actor, every character sticks with you a little bit. So I definitely have a part of her. We’re similar on the inside. I would do anything for my friends and I’m always gonna keep it real. Like Kiara, I’m a lover and a fighter.

What have you learned from filming “OBX?”

I learned to just relax a little. I can be a fast pace person but playing Kiara definitely chilled me out.

Also Read: 'Outer Banks' Creators on What That Big Cliffhanger Could Mean for a 2nd Season

What was the most challenging part about shooting “OBX?”

Definitely the physicality. It was a HOT sweaty summer. Between the running, jumping, swimming and fighting, I was definitely more active than I have been in a while. As an adult, you kind of stop going outside and running around all day. You just work out a few times a week, and I was working out on top of everything we were doing on set.

What was your favorite part of this project?

The people. The cast, the crew, the creators, everyone. I could never stop saying nice things about every single person involved.

When reading the script, what made you realize “I need to be a part of this”?

I absolutely fell in love with the script. Everything about it had fun written all over it. Kiara is so cool. I knew I had everything it took to bring her to life.

What message do you hope audiences take away from watching this show?

Always have your friend’s backs, stand up for what you believe in and relax a little.

How would you describe your off-screen relationship with the other “pogues?”

All the boys feel like my brothers for sure. I grew up with three brothers, so it’s that kind of bond.

How are you and your castmates supporting each other during quarantine?

We’ve definitely been a unit with the show coming out. We’re all experiencing something new right now so we’re in constant communication.

“OBX” is a show for the girl who loves…

Everything outdoors, hot boys and adventure.

3 words to describe “OBX” are…

3 words to describe my character are…

Should we expect a season 2?

WrapWomen has put together a select group of female Next-Gen Ambassadors who are shaping the future of our industry. We are aiming to build a unique community designed by and for the next generation of female CEOs, Academy Award-winning producers, screenwriters, film/TV stars, studio executives…basically all the kick-ass young Women in Hollywood who will one day or are already running the industry. More ambassador announcements to come! For more information about WrapWomen visit https://wrapwomen.thewrap.com