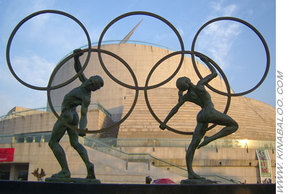 This year’s "staycation" has taken me to Laguna Beach, where the famed Pageant of the Masters has been leaving audiences gasping with amazement for 75 years. Happy anniversary. Hundreds of volunteers and professional crafts people, musicians and technicians create "tableaux vivants," or "living pictures" of famous paintings, and sculptures, and porcelain and fountains. The image at left was one of the many amazing, not-to-be-believed scenes, this of a sculpture by Edward Eyth, which was created for this year’s Olympics, and is currently on display in Beijing. Recreated here in southern California, I found it impossible to believe that two people could stand still for three minutes in this position of balance and contortion, but they did. 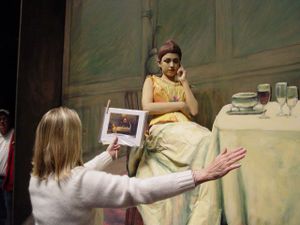 The two-hour show also featured scenes from Shakespeare, Degas, Toulouse-Lautrec, an insane living sculpture from off the top of the Garnier Opera House in Paris. Happily, from time to time one of the child posers would move a bit. Otherwise it was hard to imagine that these were real people and not painted figurines. At left, see an art director working on a scene from one of Toulouse-Lautrec’s Montmartre cafes. The show ended with its signature recreation of the "Last Supper." This outdoor event is performed seven days a week in the month of August, and is on for another week, but is sold out. (Note to the courageous: I found some tickets at the door.)