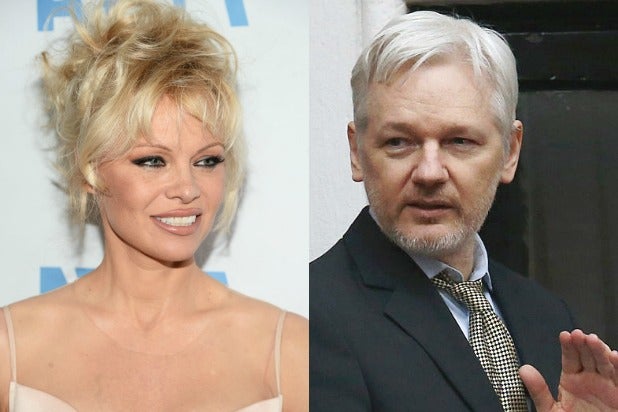 With no acting projects on the horizon, apart from a cameo in the big screen “Baywatch,” it appears Pamela Anderson now fancies herself a political poet.

The actress and model, who often champions animals as a PETA spokesperson, has now turned her attention to the White House with a new poem she has penned, titled, “I Like How You Resist Me.”

In the poem, Anderson cries for “No more war!, no walls! (around countries or embassies),” and urges us all to “not forget how to make love…”

“I will stay relentlessly engaged,” she promised, adding, “Like it or not.”

Read the full poem below:

based on my own special relationship with Julian Assange

Regarding Free Speech and Democracy.

heated up US threats,

and the French – makes this the opportune time to discuss politics romantically.

It is a romantic struggle

Things that the USA and UK bring to the relationship are Bad secrecy laws. Keeping Julian illegally detained. Hating transparency and Bombing countries.

It is dysfunctional and unequal, this relationship to date.

I wish to help them to improve it,

and make it work.

And, bring sexy back.

Just as a dysfunctional lover-

The USA has been spying on UK(reading emails and listening to calls).

All this, that the USA does is as a freakish lover or stalker would.

Keep things separate as in a good relationship:

the UK and USA relationship would be based on a fundamental reconfiguration of domestic politics, and their relationship with the rest of the world.

They then should disarm and withdraw their troops from Afghanistan and other overseas military engagements, and pursue a peaceful and cooperative diplomatic relationship with other countries.

Create a bilateral extradition treaty between them, it should at least appear as if it is between two equal westphalian state entities, rather than between a lord and vassal (or dominant and submissive partner).

It is completely disproportionate and has asymmetrical evidentiary standards.

If disarming and withdrawing from Afghanistan seems too ‘out there’.

Another dynamic approach is to

encourage other countries to reduce their quantise of arms: “If you will, I will”.

Agree with other countries to stop arming and destabilising the Middle East.

War is a racket.

Subordinating safety and human rights to the profit motives of arms exporters is not strong, or sexy.

Other relationship issues to work on jointly:

Openness and honesty are a must in any relationship.

So, need to get rid of approaching everything with secrecy and cover up.

Then get rid of them -

and replace them with laws

that can’t be abused.

Stop shouting and punishing people who offer them help (as if a couple would turn against a relationship counsellor?) – Julian is trying to help.

And, if their relationship is improved, they can expand it. Diplomatic relations with other countries should be in the spirit of mutual respect

Such as we saw in the threats to invade the embassy in violation of the Vienna convention. Or the refusal to comply with the UN ruling. A healthy relationship is reciprocal and has a single standard for behaviour.

Not a double standard,

where Britain gets to call out other countries for defying UN findings- but blow them off when they are against the UK.

I can’t help but think romantically.

That is where my compass lays. In love and compassion.

To apply common sense relationship advice might be the key.

We must not forget how to make love…

And no walls! (around countries or embassies).

I will stay relentlessly engaged.