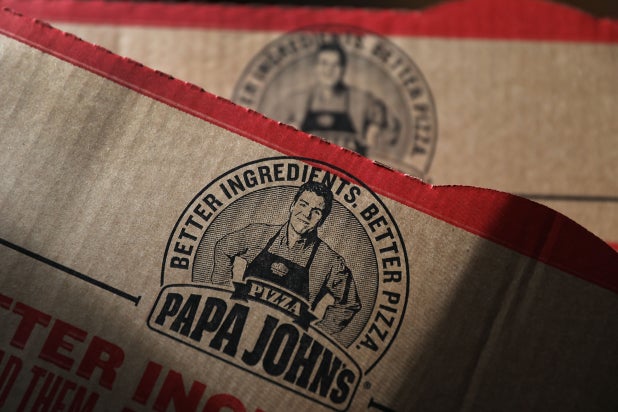 Two days after Papa John’s founder  John Schnatter resigned as chairman for using the N-word in a meeting, the pizza chain plans to pull his image from their logo and marketing materials.

According to the AP, Schnatter’s face was off at least some of Papa John’s marketing materials on Friday morning. The company told the news wire that it is still working out details and timing for when the change would fully take effect. The company has no plans to change its name, however.

A representative for Papa John’s did not immediately respond to TheWrap’s request for comment.

Schnatter’s face is synonymous with Papa John’s. The company’s founder has appeared in just about every TV commercial and his face is on all the packaging and at the center of the company’s logo.

The pizza chain released a statement Wednesday night saying that it had accepted Schnatter’s resignation. Papa John’s will appoint a new director soon and Olivia Kirtley will act as the company’s lead independent director in the interim period.

Schnatter made the racial slur during a role-playing call between Papa John’s executives and marketing agency Laundry Service. It was designed as an exercise for Schnatter to prevent a public-relations crisis but clearly backfired.

According to Forbes, Schnatter was asked how he would distance himself from racist groups online and replied: “Colonel Sanders called blacks n—ers,” Schnatter then complained that Sanders never faced public backlash, Forbes said. He also reportedly recalled his early life in Indiana, saying people there used to drag African-Americans from trucks until they died.

“News reports attributing the use of inappropriate and hurtful language to me during a media training session regarding race are true,” Schnatter said in the statement Wednesday. “Regardless of the context, I apologize. Simply stated, racism has no place in our society.”

The patriarch of the famous pizza chain stepped down as CEO of the company in December after months of turmoil following his criticism of the NFL over player protests, blaming them for low pizza sales.

Friday afternoon, the University of Louisville president Neeli Bendapudi said the University would remove Papa John’s name from its Stadium. Per the University’s official Twitter account, Bendapudi said “These comments were hurtful and unacceptable, and they do not reflect the values of our university. I have decided, with the support of our Board of Trustees, to rename our football stadium “Cardinal Stadium.”

However, per the St. Louis Courier-Journal the right to change the name of the stadium belongs to Schnatter as part of an agreement he made with the school, in return for promised donations.

From @UofLPresNeeli: "In moments of crisis, the best communities find a way to come together. Over the last 24 hours our community has been fractured by the comments made by former UofL trustee John Schnatter."

These comments were hurtful and unacceptable, and they do not reflect the values of our university. I have decided, with the support of our Board of Trustees, to rename our football stadium “Cardinal Stadium” …

… and to remove John Schnatter’s name from the Center for Free Enterprise at our College of Business effective immediately.

We can only accomplish this if we truly celebrate diversity, foster equity, and aim to achieve inclusion. I appreciate your support as we have reviewed this difficult situation.

By taking this action, we renew our community’s commitment to speaking up when it matters, doing what is right, and coming together as one team – our Cardinal family – to heal and move forward. The brightest days for this university are still ahead. Go Cards!"