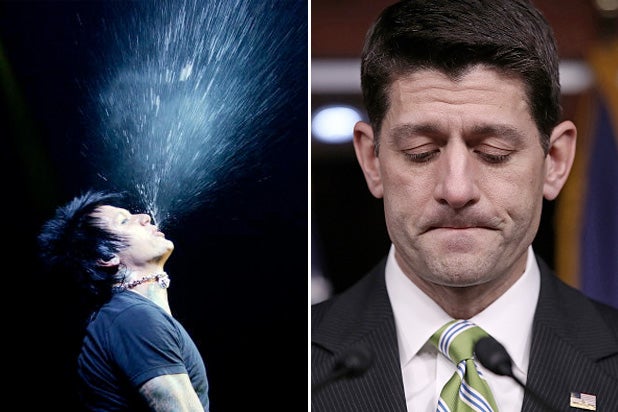 “When we feel defeated we listen to Paul Ryan,” snarked the band on its official Twitter account.

“But seriously,” the band added in a follow-up tweet, “Last Resort was written about suicide, if anyone is feeling get help at @800273TALK.”

The band couldn’t resist a final tweet tweaking the 47-year-old Republican from Wisconsin — who is known to spend much time in the congressional gym — by posting a pic of T-shirt-clad Ryan doing a bicep curl with a 40-pound barbell and the caption: “Listens to Last Resort One Time…”

When we feel defeated we listen to Paul Ryan. ????

…but seriously Last Resort was written about suicide, if anyone is feeling defeated get help at @800273TALK

Halpern convincingly photoshopped a fragment of a New York Times story to make it look as though it detailed how the House Speaker had entered a deep depression after failing to secure enough votes to pass his plan to repeal and replace Obamacare despite the fact that his party controls both houses of Congress and the White House.

And many seemed to swallow the idea that the bro-ish Republican might find consolation in the Nu Metal band’s work after suffering an embarrassingly public defeat of his health care plan at the hands of his own party members.

This despite the fact that “Last Resort” is a notoriously dark song about depression whose lyrics include: “Cut my life into pieces/this is my last resort/Suffocation, no breathing/don’t give a f– if I cut my arm, bleeding.”

Even Halpern was surprised that his goof went so viral. “This is my greatest accomplishment in a career of incredibly mediocre accomplishments,” he tweeted.