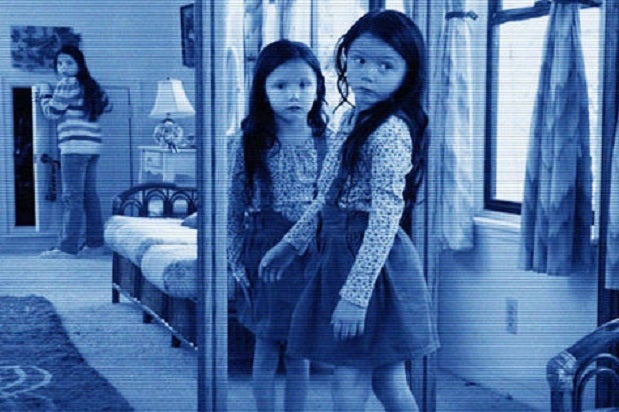 Paramount Pictures is projecting that “Paranormal Activity: The Ghost Dimension” will open to roughly $11 million on Oct. 23 — roughly half of what tracking suggests it should bring in.

That’s because several of the largest theater chains have opted not to book the sixth movie in the found-footage horror franchise because of the studio’s experiment with earlier video-on-demand availability.

Regal Cinemas and Cinemark, the nation’s largest and third-largest chains, are among several exhibitors refusing to play “Ghost Dimension” since Paramount struck a deal with rivals AMC Theatres and Cineplex Entertainment in July to allow consumers to watch the movie at home just 17 days after it leaves most theaters, rather than the standard 90 days.

Shortening the “window” between theatrical and VOD availability is a hot-button issue for theater owners, who have argued that people won’t go to the multiplex if they know they can watch at home in less than three months.

But the idea won’t go away for an industry facing a consumer migration away from theaters to home viewing amid increasing digital competition.

Paramount said “The Ghost Dimension” will open in around 1,350 theaters, a little less than half the 2,867 locations of the last film in the series, “The Marked Ones,” despite the fact that the new film is the first 3D entry in the series.

Carmike Cinemas, Marcus Theatres and Harkins Theatres have said they will not book the film, while the Landmark Theatres, Alamo Drafthouse and National Amusement chains will. Exhibitors will receive an unspecified percentage of the studio’s digital revenue.

Theater chains may take a similar approach to “Scout’s Guide to the Zombie Apocalypse,” another low-budget horror film that Paramount plans to release on Oct. 30 with a similar shortened VOD window.

“We appreciate Paramount’s willingness to seek exhibitor input and provide for exhibitor participation in certain ancillary revenues as they evaluate alternative distribution models,” Regal Chief Executive Amy Miles said in a recent earnings call. “However, the parameters of the current proposal, both economic and structural, simply do not make sense for us given the potential risks to the long-term health of our business.”

It’s more than an academic exercise for Paramount, because the “Paranormal Activity” movies are moneymakers. Even though the at $18 million opening for last year’s “The Marked Ones” was the weakest in the series, the film still went on to make $32 million at the domestic box office and $91 million worldwide — on a $5 million budget.

“Ghost Dimension” cost just over $10 million to produce, mostly because of the addition of 3D.

It’s no accident that Paramount is testing the window on horror films, which tend to be front-loaded in terms of attendance and pulled from theaters more quickly than other film genre.

But Viacom-owned Paramount is considering expanding the strategy, and will assess the per-theater returns on the film as well as the VOD numbers in making the call.

Other studios and chains will be watching as well, and if they were to make similar deals, it could disrupt a business model that has since the onset of the VCR been the standard for Hollywood studios, theater owners and moviegoers.