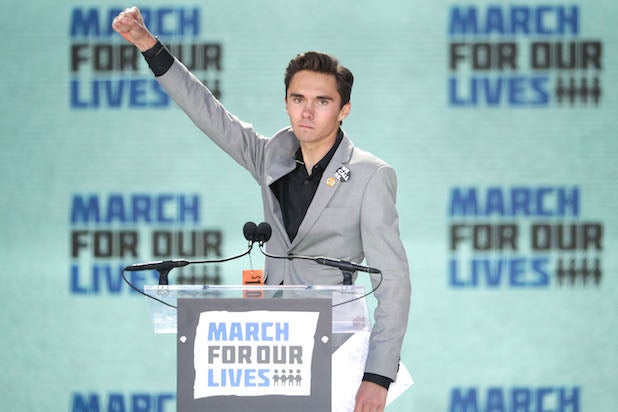 Earlier in the day, Ingraham appeared to revel in news that Hogg had been rejected from a number of colleges in California, including UCLA.

Ingraham also added a news item on the subject from Ben Shapiro’s Daily Wire — a website that has been sharply critical of Hogg and other Parkland high school students who have used last month’s massacre of 17 people to call for increased gun control.

Ingraham’s comments were met with widespread criticism from many who took her tweet as mean-spirited. Several hours later, Hogg joined in, tweeting out a list of what he said were Ingraham’s top advertisers, and urging his Twitter followers to contact them.

Pick a number 1-12 contact the company next to that #

The 13 companies listed did not immediately respond to requests from TheWrap to confirm they advertise on Ingraham’s show.

Whether a boycott to push back against Ingraham’s insult would be successful wasn’t clear Wednesday night, but at least one of Hogg’s celebrity supporters threw his weight behind the effort: “Guardians of the Galaxy” director James Gunn.

I stand with @davidhogg111. It’s acceptable to disagree with his politics. It’s another to resort to online bullying and shaming of kids who, agree with them or not, are trying their best to make this world a better place, as @IngrahamAngle has done. Let the advertisers know. https://t.co/OshTEFKwKc