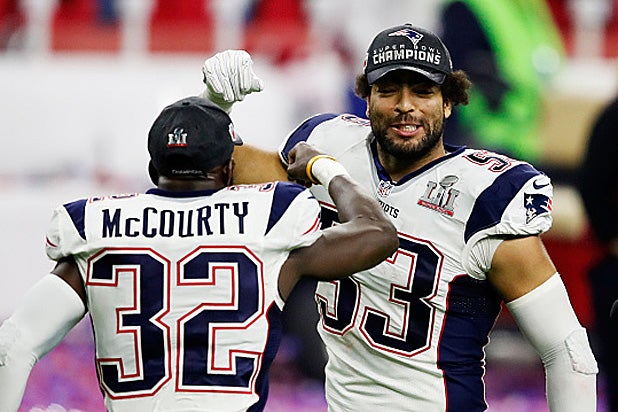 The New England Patriots are going to be a few players short when they visit the White House for the traditional visit by the Super Bowl champion team with the president.

McCourty (pictured above left with Kyle Van Noy) told TIME via a text message, “I’m not going to the White House. Basic reason for me is I don’t feel accepted in the White House.

“With the president having so many strong opinions and prejudices I believe certain people might feel accepted there while others won’t,” he added.

McCourty’s comments follow teammate Martellus Bennett’s proclamation before the Patriots even played in Sunday’s Super Bowl that he would not be making the trip to Washington, D.C., if they won.

“I am not going to go. I can elaborate later on in life, right now I am just trying to enjoy this … People know how I feel about it, just follow me on Twitter,” Bennett said after the epic 34-28 overtime victory, according to CNN.

The outspoken and often entertaining tight end said he isn’t worried about team owner Robert Kraft being upset if he is a no-show, adding that the team tries to avoid talking about politics in the locker room.

“You just don’t bring that to work. We all have our beliefs. We accept people for who they are,” he said.

McCourty and Bennett were among the players who joined in Colin Kaepernick’s stance against racism earlier in the season.

Here are Martellus Bennett and Devin McCourty raising their fists for the National Anthem. Patriots, both. pic.twitter.com/rDilAEaCUj

They both raised their clenched fists at the end of the National Anthem ahead of the Patriots’ season opener on Sept. 11 in Arizona against the Cardinals.

After a “Make America Great Again” cap was spotted in Tom Brady’s locker during Trump’s initial presidential campaign, the Super Bowl MVP has mostly kept quiet about the polarizing president.

When asked about Trump at the Super Bowl Media Night on Jan. 31, the quarterback replied: “I have a right to stay out of it, too. I want to keep my focus on where it should be for me at this moment,” USA Today reported.

Trump wasn’t so diplomatic over his support for the Patriots over the Falcons, predicting before the game that they would win by eight points, then tweeting his congratulations after the historic comeback victory.

What an amazing comeback and win by the Patriots. Tom Brady, Bob Kraft and Coach B are total winners. Wow!

Meanwhile, Trump’s longtime friend and the Patriots’ longtime owner Kraft praised the president’s loyalty in an interview with the New York Daily News last week, saying he was there for him during his darkest days.

“When Myra [Kraft’s wife] died, Melania and Donald came up to the funeral in our synagogue, then they came for memorial week to visit with me,” he said. “Then he called me once a week for the whole year, the most depressing year of my life when I was down and out. He called me every week to see how I was doing, invited me to things, tried to lift my spirits. He was one of five or six people that were like that. I remember that.”