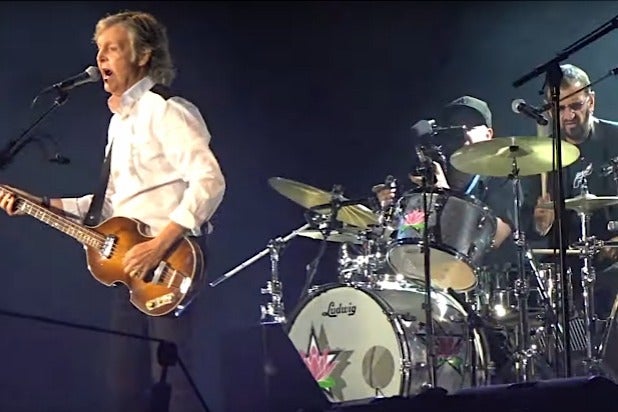 At the end of the final show of his latest tour, Paul McCartney had a special surprise for the tens of thousands that gathered to see him at Dodger Stadium in Los Angeles: a Beatles reunion.

As part of a half-hour encore to a 2.5 hour set, McCartney and Starr joined together to play a pair of Beatles classics: the reprise to “Sgt. Pepper’s Lonely Hearts Club Band” and the proto-metal “White Album” track “Helter Skelter.”

Watch in the links below:

Ok that Sgt. Pepper video went wild so here are Paul McCartney and Ringo Starr playing “Helter Skelter” last night and then expressing their love for each other if anyone needs to see that: ????❤️ pic.twitter.com/X4pNzf5mc6

Their public meeting became deeply emotional, as Starr noted what McCartney said earlier in the show while reminiscing about the late John Lennon: “You didn’t say ‘I love you man,’ to another guy in those days.”

Not wanting to miss that chance, Starr and McCartney exchanged those words before the Beatles faithful in Chavez Ravine.

Saturday’s show was only the third time McCartney had performed in Dodger Stadium. The British musician previously performed there in 2014, and before that in 1966 in what would be the Beatles’ penultimate live show. Other songs performed by McCartney during the set included “Got to Get You Into My Life,” “Lady Madonna,” “Ob-La-Di, Ob-La-Da,” “Let It Be,” and a fireworks-filled performance of “Live and Let Die.” McCartney also convinced the crowd to turn on their cellphone lights while he performed some songs from his latest album, “Egypt Station.”

“We know what people want to hear, because when we play a Beatles song, all the cellphones come on and it looks like a galaxy of stars, and when we do a new song, it looks like a black hole. But we’re going to do the new ones anyway,” he said.

McCartney was also joined onstage during the encore set by Joe Walsh of The Eagles to close out the night with the “Abbey Road” track, “The End.”

And then Joe Walsh appeared on stage with Paul McCartney… #paulmccartney #joewalsh pic.twitter.com/lu1kHqRuIl