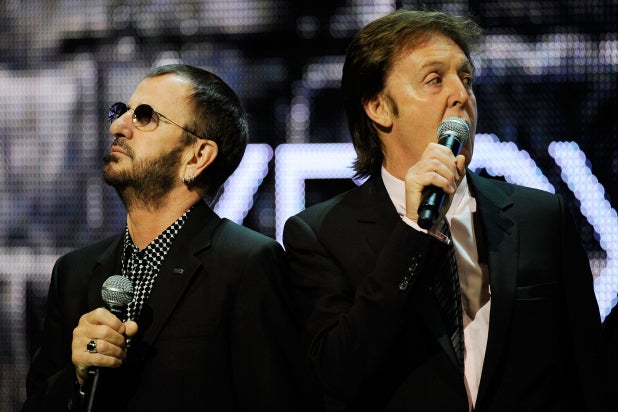 Paul McCartney and Ringo Starr — who as members of the Beatles will receive the 2014 Recording Academy Lifetime Achievement Award — will also perform. Sara Bareilles and Carole King will add a special duet to “Music’s Biggest Night” on Jan. 26, when LL Cool J returns as host.

This will be the first performance on the Grammy Awards telecast for Sara Bareilles, Macklemore & Ryan Lewis, Kacey Musgraves, and Ringo Starr.

The show will take place at Staples Center in Los Angeles and will be broadcast on CBS from 8 – 11:30 p.m. (ET/PT). It will also be on radio worldwide via Westwood One, and covered online at Grammy.com and CBS.com.

Macklemore & Ryan Lewis have seven nominations: Album Of The Year and Best Rap Album for “The Heist”; Song Of The Year for “Same Love” (along with Mary Lambert); Best Rap Performance (along with Wanz) and Best Rap Song for “Thrift Shop”; Best Music Video for “Can’t Hold Us”; and Best New Artist.

Bareilles and McCartney are each up for two awards: Bareilles is nominated for Album Of The Year for “The Blessed Unrest” and Best Pop Solo Performance for “Brave”; and McCartney is up for Best Rock Song for “Cut Me Some Slack” (along with Dave Grohl, Krist Novoselic, and Pat Smear) and Best Music Film for “Live Kisses.”

Legend and Urban each have one nomination: Legend is nominated for Best R&B Album for “Love In The Future”; and Urban has a nod in Best Country Duo/Group Performance for “Highway Don’t Care” (along with Tim McGraw and Taylor Swift).

The 56th Annual Grammy Awards are produced by AEG Ehrlich Ventures for The Recording Academy. Ken Ehrlich is executive producer, Louis J. Horvitz is director, and David Wild and Ken Ehrlich are the writers.