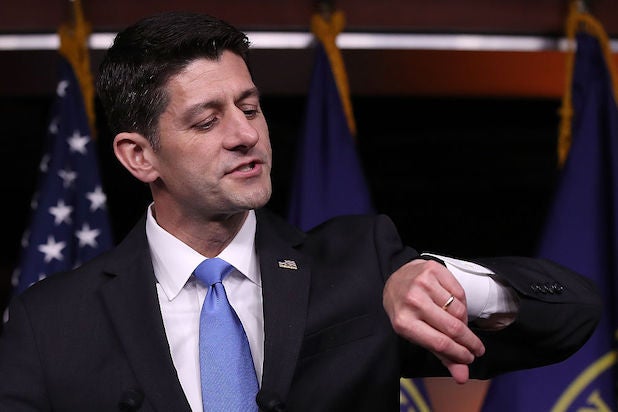 Speaker of the House Paul Ryan insisted Thursday that his relationship with Donald Trump was heading in the right direction. But for those able to read between the lines, it was clear the only way it was going was Paul Ryan’s.

Asked what he thought of Trump following their much-hyped meeting in Washington earlier in the day, Ryan — not usually one to stumble — came up with this: “Eh… his personality… I thought… I thought it was a very good personality. He’s a very warn… warm genuine person.”

But it wasn’t just the words that made it clear this was no budding bromance. Ryan’s rambling answer had all the excitement of a C-SPAN weekend marathon.

He then conveniently let it slip that the two had engaged in a riveting conversation about civics, specifically Article One of the Constitution. For those who may not remember, that would be the part which gives all legislative power to Congress.

Ryan was elegantly implying that he essentially gave Trump a free lesson in “This Is How Stuff Works Around Here 101.”

He couldn’t have spelled it out more clearly if he stood on top of a flashing neon sign: It was time for Trump to listen up.

And just to make sure Trump got the message, Ryan delivered one final blow, tweeting a picture of himself with a bunch of school kids over the caption: “My most important meeting of the day.”

Ironically the self-described master of the deal went all the way to Washington to negotiate a truce with the GOP but instead got schooled.

You gotta hand it to Ryan, though. His party may be imploding but he hasn’t lost his sense of humor.

My most important meeting of the day. pic.twitter.com/pnhIRkLPq6