The band Pearl Jam promoted a recent show in Missoula, Montana with artwork featuring the White House on fire and included a bald eagle eating what appears to be a dead and rotting corpse of President Donald Trump.

In a tweet that included an image of the poster, Ament explained its meaning in a hand-scrawled note:

D.C. Burning Tester Evel Knievel on Tractor…
Over The Cesspool Below
Russian Money, Golf courses, Hookers?
Maryland Matt Stars N Strips As Flames
Y’all Know The Deal, We’re at a Tipping Point, And Its Time For Action.
Jon Tester is the Real Deal, and Nobody cares More About our Country And Especially Montana.
So Here We Are…
This was a Fun Collab With One Of My Favorite Artists, Bobby Draws Skulls.
He Killed It!
-Jeff Ament

Reps for Tester and Pearl Jam did not immediately respond to request for comment.

Here’s a closer look at what appears to be a depiction of Trump in the artwork: 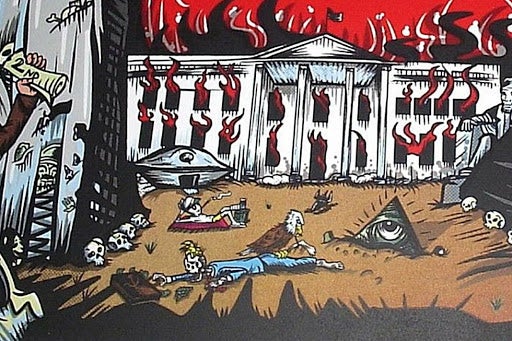 The band is known to be politically close to Tester. Ament himself appeared with the senator in advance of the concert at Washington Grizzly stadium on Monday. Ament even donated $2,100 to Tester’s campaign back in 2006. Both men are Montana natives.

“My earliest recollection of Jon is when he was still in high school he reffed at least two or three of our fifth-grade basketball games — volunteered,” said Ament while on stage with Tester. “And I’m sure I deserved a technical at least one of those games.”

The moment is another example of artists using the death of the Trump as a motif to protest his presidency. In the past Kathy Griffin, Snoop Dogg, Robert De Niro and others have imagined Trump’s demise with varying levels of violence and have suffered varying consequences from the public. While Griffin’s decapitated Trump nearly derailed her career, Snoop and De Niro largely escaped backlash.

The National Republican Senatorial Committee blasted the poster in a tweet, calling it “DESPICABLE.”