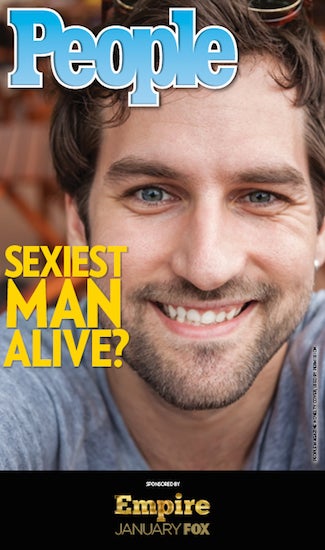 In a promotional effort with Fox’s forthcoming drama “Empire,” users can tweet selfies with the hashtag “#SMA2014” for a chance to be superimposed onto the popular cover and splayed across a billboard at 43rd and Broadway.

Both men and women can send in shots, as the final image will also carry an “Empire” branded logo of “Dangerously Sexy.” Fan-submitted photos will also be featured in a gallery on People.com.

On “Jimmy Kimmel Live” the Tuesday evening before, host Kimmel will reveal this year’s coverboy and nab the first interview of his 12-month reign. Recent Sexiest Men Alive include Adam Levine, Channing Tatum and Bradley Cooper.

The issue ranks among the celeb mag’s best-selling, and counts a sister franchise in the “Most Beautiful” list.  “Empire,” which hits Fox in January from Lee Daniels and executive producer Brain Grazer, chronicles a music dynasty led Terrence Howard and Taraji P. Henson.