Riding appearances by top musical performers, including Mary J. Blige, as well as popular Pastor Marvin Winans and an “A” Cinemascore, “Tyler Perry’s I Can Do Bad All By Myself” rose to the top of a weak post-Labor Day box office, securing $24 million for the three-day period, according to Hollywood.com estimates. 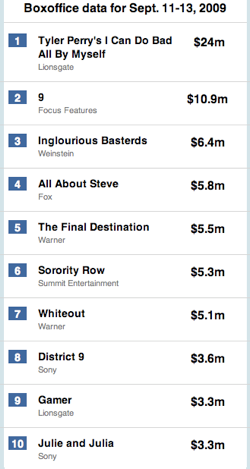 It was the third best opening for a Perry-produced, Lionsgate-released title, scoring with the producer’s reliable following of African-Americans (85 percent of the audience), females (75 percent) and older audiences (76 percent were older than 25).

The opening was also Perry’s best for a movie that doesn’t feature his iconic “Madea” character in the title (although Perry appears briefly in his Madea house dress).

“We were hoping to do high teens or low twenties. It’s always nice when you’re above expectations,” said David Spitz, president of distribution for Lionsgate.

“I Can Do Bad’s” good performance was the only punctuation on what is usually moribund first-post-summer weekend for the box office — which was 8 percent lower than last year, according to studio figures.

Finishing in second place was Focus Features’ “9,” which added $10.9 million over the three-day period, bringing the dark, Tim Burton-produced animated title’s five-day total to $15.3 million, playing at only 1,661 locations.

Meanwhile, among other new entries, Summit Entertainment’s “Sorority Row” and Warner’s “Whiteout” entered into a market that was already flush with R-rated scary movies, and both wound up getting hammered.

Starring Rumer Willis in a film about a sorority prank gone horrible wrong, “Sorority Row” finished the weekend with $5.3 million, which is probably not disastrous given Summit’s $12.5 million budget.

Both films finished behind the week-three performance of Warner/New Line’s R-rated 3D horror film “The Final Destination,” which added another $5.5 million and now has a domestic take of $58.2 million.

Among other incumbents, Weinstein’s Quentin Tarantino-directed “Inglourious Basterds” passed the $100 million mark, finishing the weekend with $6.5 million — only a 45 percent week-to-week decline — and putting its four-week total up to $104.2 million.

The $70 million movie had grossed nearly $84 million abroad going into the weekend. Weinstein co-financed the film along with Universal.

In fourth place, Fox romantic comedy “All About Steve,” starring Sandra Bullock and Bradley Cooper, added $5.8 million and now has a two-week total of $21.8 million.