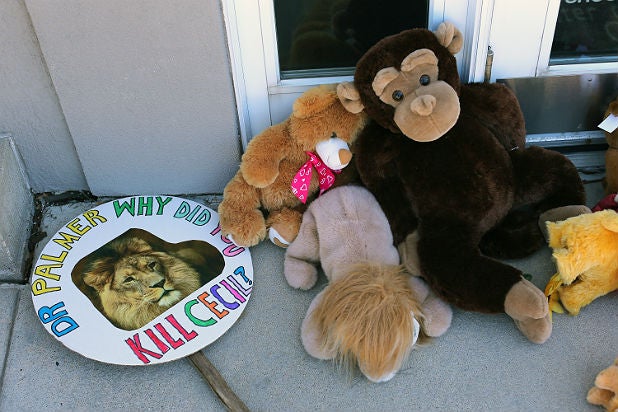 People for the Ethical Treatment of Animals (PETA) is calling for the death of Walter Palmer, the Minnesota dentist who hunted down and killed Cecil the Lion.

“Hunting is a coward’s pastime,” PETA President Ingrid Newkirk said in a statement Wednesday. “If, as has been reported, this dentist and his guides lured Cecil out of the park with food so as to shoot him on private property, because shooting him in the park would have been illegal, he needs to be extradited, charged, and, preferably, hanged.”

Zimbabwe’s most famous and beloved lion was found skinned and decapitated outside a national park on the outskirts of Hwange last month after Palmer reportedly paid $50,000 to shoot him with a crossbow and rifle.

The killing of the 13-year-old lion, who was famed for his lush black-tinged mane, quickly sparked outrage across the world from animal lovers and a flood of stars including Ricky Gervais, Olivia Wilde, Sharon Osbourne and Jane Goodall.

Jimmy Kimmel got visibly emotional on his show Tuesday, comparing Palmer’s actions to those of Bill Cosby. “Is it that difficult for you to get an erection that you need to kill things?” the ABC late-night host asked. “If that’s the case, they have a pill for that. It works great. Just stay home and swallow it and you save yourself a lifetime of being the most hated man in America who never advertised Jell-O pudding on television,” he added.

Amid the angry backlash, Palmer’s dental clinic in Bloomington, Minnesota, remained closed Wednesday as a memorial for the beloved lion appeared, with mourners leaving stuffed animals and notes for Cecil at the practice’s door.

Protestors flooded the streets holding up signs reading “Murderer,” “Animals are not trophies” and “Justice for Cecil.”

In an email distributed Tuesday night to his patients, Dr. Palmer said “media interest” had disrupted his practice and caused people to overwhelm his staff with comments and phone calls. Patients seeking help were being referred to other offices for the time being, reported the New York Times.

“I don’t often talk about hunting with my patients because it can be a divisive and emotionally charged topic,” he wrote in his email. “I understand and respect that not everyone shares the same views on hunting.”

Aside from his good looks, Cecil was a participant in a study conducted by the U.K.’s Oxford University, and he had been outfitted with a GPS collar.

Police in Zimbabwe have arrested two people related to Cecil’s death who appeared in court Wednesday, and Palmer is being sought by officials in connection with the case, according to CNN. He may also face poaching charges as it is believed that the lion was lured out of the national park into an adjacent hunting concession area with freshly killed bait.

Palmer has had past problems related to hunting. He faced probation after he pleaded guilty in 2008 to making a false statement to federal officials about where, exactly, he killed a black bear in Wisconsin.

Watch video footage of Cecil in all his glory below.