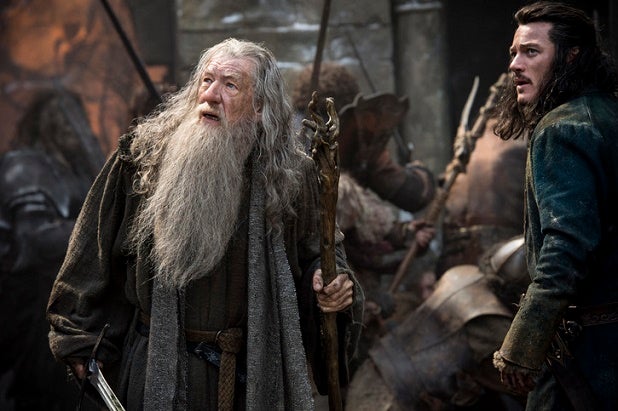 “The Hobbit: The Battle of the Five Armies” marches into theaters Wednesday, and the final installment in Peter Jackson’s trilogy could dominate the holiday box office through the end of the year.

The Middle-earth epic from New Line and MGM should take in north of $75 million over the five days, say analysts, and easily unset the current No. 1 film, “Exodus: Gods and Kings.”

The weekend’s other two wide openers — the Fox comedy sequel “Night at the Museum: Secret of the Tomb” and Sony’s musical “Annie” – open Friday and are expected to take in $25 million and around $15 million respectively. Fox Searchlight is expanding the Reese Witherspoon survival saga “Wild” into a 1,035 theaters — up from 116 — after two strong weeks in limited release for the awards hopeful.

The biggest hurdle for “The Hobbit” could be the overall box office, which has been sluggish since November. It’s hard to know if Tuesday’s threats of a 9/11-like attack on theaters showing “The Interview” by a group claiming responsibility for the Sony cyberattack will hurt, but it won’t help.

The first two “The Hobbit” movies have grossed more than $1.9 million worldwide. “An Unexpected Journey” took in $303 million domestically and $714 million from overseas in 2012, while last year’s “The Desolation of Smaug” rolled up $258 million in the U.S. and $700 million from abroad.

The finale could ultimately finish somewhere between the first two movies domestically and has a shot at topping both abroad. It’s off to a great start overseas, taking in $122 million in its debut last weekend.

Martin Freeman, Ian McKellen, Richard Armitage, Evangeline Lilly and Orlando Bloom return in “Five Armies,” which was produced by Jackson and his partner Fran Walsh, along with Philippa Boyens and Guillermo del Toro.

The reviews are OK (60 percent positive on Rotten Tomatoes) but that won’t matter to hardcore “Hobbit” fans, of which there are plenty. Its a little behind “Smaug” on Twitter, but ahead of it in terms of Facebook “likes.”

The PG-13-rated “Five Armies” will be in more than 3,850 theaters, including a nearly full run on IMAX theaters. Previews begin Tuesday night in selected theaters.

“Night at the Museum: Secret of the Tomb” features one of the film big-screen performances of the late Robin Williams, who co-stars with Ben Stiller, Owen Wilson, Ben Kingsley and Dan Stevens. Director Shawn Levy is back for his third go-round.

It’s been five years since the second film in the series, “Battle of the Smithsonian,” made $177 million domestically and $235 million overseas in 2009. That was considerably behind the original 2006 film, which brought in $250 million in the U.S. and $324 million from abroad.

Again, it’s just OK on Rotten Tomatoes at 50 percent positive, and is showing strength on Twitter.

Writer-director Will Gluck’s “Annie” is a fresh take on the classic girl-and-her-dog comic strip tale, featuring a mainly African-American cast.

“Annie” was one of five movies posted on piracy sites in the wake of last month’s hack attack on Sony Pictures and has been downloaded roughly 317,000 times. To what extend that will cut into the family crowd that is the target of the PG-rated family film remains to be seen.

The critics are cool to “Annie” — it’s at a weak 19 percent positive on Rotten Tomatoes and is pacing way behind another holiday season musical, Disney’s “Into the Woods,” on both Facebook and Twitter.