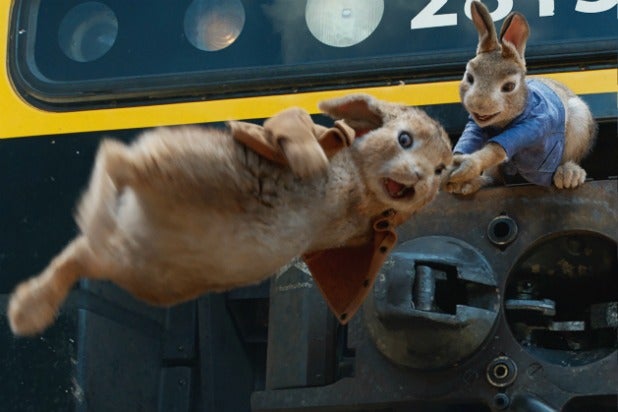 Sony Pictures has apologized for a food allergy gag in their feature film “Peter Rabbit.”

In the movie, Peter (voiced by James Corden) attempts to enter Mr. McGregor’s garden by shooting a blackberry into the movie villain’s mouth. McGregor is allergic to blackberries and goes into anaphylaxis. The Kids With Food Allergies organization said on Facebook that such a joke can be “harmful.”

“Food allergies are a serious issue,” Sony Pictures and the “Peter Rabbit” filmmakers said via a statement obtained by TheWrap. “Our film should not have made light of Peter Rabbit’s archnemesis, Mr. McGregor, being allergic to blackberries, even in a cartoonish, slapstick way. We sincerely regret not being more aware and sensitive to this issue, and we truly apologize.”

Kenneth Mendez, the president and CEO of Asthma and Allergy Foundation of America, wrote an open letter to Sony about the scene. In it, Mendez also called out Sony movies “The Smurfs” and “Cloudy With a Chance of Meatballs” for doing the same gag.

“Making light of this condition hurts our members because it encourages the public not to take the risk of allergic reactions seriously, and this cavalier attitude may make them act in ways that could put an allergic person in danger,” he wrote.

“We would welcome the opportunity to educate your company and the cast of the movie about the realities of food allergy so that they and your viewing audience can better understand and recognize the gravity of the disease,” Mendez continued. “We would like to work together to promote positive attitudes and safe environments for those with disabilities such as food allergies. We encourage you to examine your portrayal of bullying in your films geared toward a young audience. We strongly urge you to refrain from the type of programming that mocks food allergies in the future.”