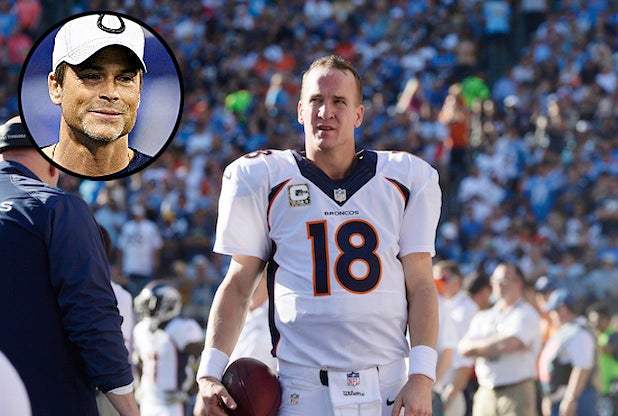 After terrorizing NFL defenses for the past 18 seasons, Peyton Manning is turning his talents on Rob Lowe — but this time it’ll be his comedy skills that he’ll be showing off rather his throwing arm.

The Super Bowl champion and four-time NFL MVP will join six comedy veterans for the Comedy Central special, which is set to tape Saturday and will air on Sept. 5, CBS Sports reports.

If past roasts are anything to go by, there’ll be more F-bombs than audibles of “Omaha” when the former Denver Broncos and Indianapolis Colts QB takes to the stage.

The 14-time Pro Bowler, who is inevitably heading to the NFL Hall of Fame, is no stranger to TV having appeared on “Saturday Night Live” three times, including hosting one of the show’s highest-rated episodes.

Not coincidentally, Lowe is a lifelong Colts fan, and he famously set Twitter ablaze in 2012 when he announced that Manning was retiring from football.

“Hearing my fave, #18 Peyton Manning will not return to #NFL. Wow. #Colts,” he wrote, according to ESPN.com. “My people are saying Manning will retire today. What do you hear? #NFL.”

That turned out to be untrue, but Manning was released by the team to make room for rookie Andrew Luck. However, he went on to play four more seasons and win a second ring with the Broncos before really retiring on March 17, 2016.